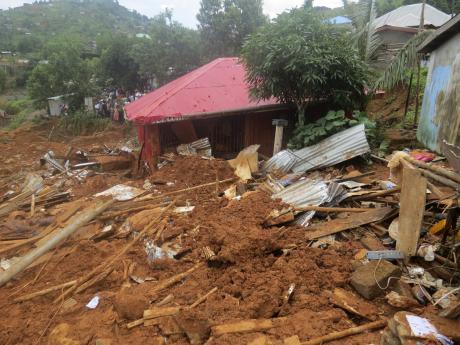 File
Volunteers search for bodies from the scene of heavy flooding and mudslides in Regent, just outside of Sierra Leone's capital Freetown.

Fatmata Kamara had just stepped outside her house before dawn on Monday when she saw the muddy hillside collapsing above her. The only thing she could do was run.

She was one of the survivors, those who managed to escape the surging mudslides and floodwaters in and around Sierra Leone's capital that killed more than 300 people, many of them trapped as they slept. Another 600 people are missing, the Red Cross said yesterday, and the death toll is expected to rise.

Thousands lost their homes in the disaster, which was triggered by heavy rains.

"I ran away from the house, leaving behind my family," a grieving Kamara told the Associated Press. "I am the only one that has survived, as my house and dozens of others were covered with mud and boulders."

Rescuers dug with their bare hands through the thick, reddish mud to try to find any survivors in the debris of the homes. Heavy equipment was later brought in, said government spokesman Cornelius Deveaux. The military also was deployed to help.

Some bodies were swept into the sea off the coast of the West African nation and have begun washing back ashore.

The mortuary of the Connaught Hospital in central Freetown was overwhelmed with the dead. More than 300 bodies of men, women and children were carried there, and many were laid out on the floor. Deveaux said an exact death toll was unknown, and many of the bodies were horribly mangled.

President Ernest Bai Koroma said Sierra Leone was in a state of grief and mourning, with many survivors still in shock.