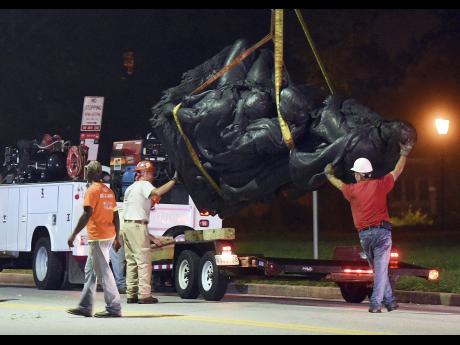 Jerry Jackson
Workers remove a monument dedicated to the Confederate Women of Maryland early yesterday, after it was taken down in Baltimore. Local news outlets reported that workers hauled several monuments away, days after a white nationalist rally in Virginia turned deadly.

Confederate monuments in Baltimore were quietly removed and hauled away on trucks in darkness early Wednesday, days after a violent white nationalist rally in Virginia that was sparked by plans to take down a similar statue there.

Pugh made the decision Tuesday morning to remove the statues that night, her spokesman Anthony McCarthy said at a news conference yesterday.

"As soon as I realised they were easy to move," Pugh said.

Pugh said the removal was done overnight deliberately, in order to avoid attention.

"It was important that we move quickly and quietly," Pugh said, "and that's what we did."

Elliott Cummings, a member of the Maryland Sons of Confederate Veterans, denounced Pugh's "barbarism and Taliban-esque actions" in tearing down the statues. "I'm angry and very sad at the same time."

Workers used cranes to lift the towering monument to Robert E. Lee and Thomas J. 'Stonewall' Jackson onto a flatbed truck in the dark.

"I did what was right for my city," Pugh said. "Any city that has Confederate statues has concern about violence occurring in their city. Baltimore is right in the midst of getting a consent decree completed, that isn't something that's needed."

Baltimore exploded in civil unrest in the spring of 2015 after a 25-year-old black man died in police custody. The unrest prompted the firing of the city's police chief, and a Justice Department investigation into allegations of abuse and discriminatory policing practices. Earlier this year, the city entered into a court-enforceable agreement to overhaul the department.