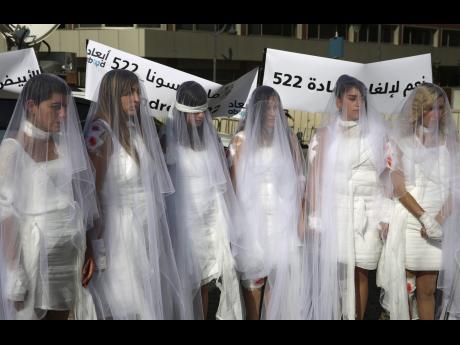 Bilal Hussein
Lebanese women, dressed as brides in white wedding dresses stained with fake blood, protest in front of the government building in downtown Beirut, Lebanon, against article 522 in the Lebanese penal code that stipulates that a rapist is absolved of his crime if he marries his victim.

Lebanon's parliament yesterday abolished a law that allowed rapists to avoid prison by marrying their victims.

The repeal of the law, which had been in place since the 1940s, follows years of campaigning by women's rights advocates. Tunisia, Morocco and Egypt have cancelled similar 'marry the rapist' clauses over the years, and Jordan's parliament recently repealed a similar law.

The clause remains on the books in Algeria, Iraq, Kuwait, Libya, the Palestinian territories and Syria, as well as several countries in Latin America and in the Philippines and Tajikistan, according to Human Rights Watch. Conservatives in the Middle East who support such laws argue that marriage salvages the honour of the woman and her family.

The Lebanese law stated that rape is punishable by up to seven years in prison, or more if the victim is mentally or physically disabled. Article 522 added that if the rapist marries the victim, criminal prosecution is suspended.

Legislator Ibrahim Kenaan told The Associated Press that the clause should have been abolished a long time ago, saying "a woman has the exact same rights as the man". He added that "we are in a society that enjoys freedoms, equality and justice and it is necessary not to have such injustice and infringement against (women's) rights."

Danielle Hoyek, Founder of Abaad, a local NGO campaigning against the law, said, "We cannot but say thank you to the Lebanese parliament for this achievement and victory for women and girls in Lebanon.

"We should be sending a clear message to Lebanese public opinion, especially women and girls, that any sexual violence and rape will be punishable from now on," she said.

"The repeal of Article 522 is an important and overdue step to protect women's rights in Lebanon," said Bassam Khawaja, Lebanon researcher at Human Rights Watch. "Parliament should now follow this up by passing pending legislation to end child marriage and marital rape, both of which are still legal in Lebanon."