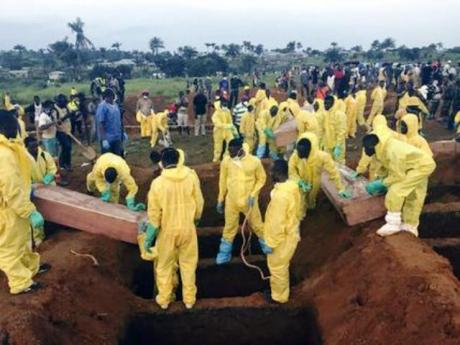 AP File
FILE- In this Thursday, Aug. 17, 2017 file photo, volunteers handle a coffin during a mass funeral for victims of heavy flooding and mudslides in Regent at a cemetery in Freetown, Sierra Leone.

FREETOWN, Sierra Leone (AP) -- Churches across Sierra Leone held special services today in memory of those killed in mudslides and flooding earlier this week, as hospital officials announced the toll had risen to nearly 500 bodies collected.

More than 600 people remain missing and rescue officials have warned that the chances of finding survivors are decreasing each day. The death toll earlier stood at 450.

The Inter-Religious Council called for the services to be held Sunday in honour of the deceased, as special prayers and recitals were offered in mosques Friday and Sunday.

The preacher at Buxton Memorial Methodist Church in Freetown, the capital, offered a sermon that looked at mankind's contribution to the disaster, as a gospel band rendered the song "Papa God Sorry for Salone (Sierra Leone)."

Large-scale-burials have taken place all this week amid rainy weather that threatened further mudslides.

The government of the impoverished West African nation in recent days has warned residents to evacuate a mountainside where a large crack has opened. Thousands of people live in areas at risk and the main focus is making sure they leave before further disaster, authorities have told local media.

"Water sources have been contaminated" and that officials "fear for an outbreak of waterborne diseases," said Saidu Kanu, country director for World Hope International.

Foreign aid from the rest of the world is being sent to Freetown, said authorities.