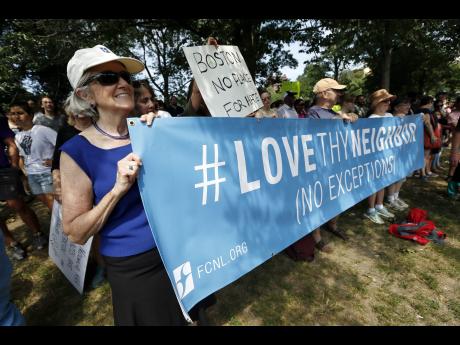 Police Commissioner William Evans said 500 officers - some in uniform, others undercover - were deployed to keep the two groups apart yesterday.

Boston's Democratic mayor, Marty Walsh, and Massachusetts' Republican governor, Charlie Baker, both warned that extremist unrest wouldn't be tolerated in this city famed as the cradle of American liberty.

Organisers of the midday event, billed as a "Free Speech Rally," publicly distanced themselves from the neo-Nazis, white supremacists, and others who fomented violence in Charlottesville on August 12.

A woman was killed at that Unite the Right rally, and scores of others were injured, when a car ploughed into counter demonstrators.

Opponents feared that white nationalists might show up in Boston anyway, raising the spectre of ugly confrontations in the first potentially large and racially charged gathering in a major US city since Charlottesville.

But only a few dozen conservatives turned out for the rally on historic Boston Common - in stark contrast to the estimated 15,000 counter protesters - and the conservatives abruptly left early.