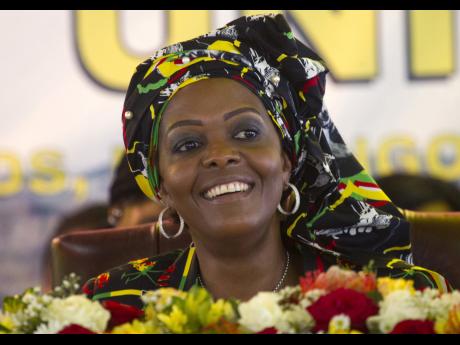 Granted diplomatic immunity by South Africa, the wife of Zimbabwean President Robert Mugabe returned home from Johannesburg yesterday despite calls that she be prosecuted for allegedly assaulting a young model at a luxury hotel there.

Zimbabwean state broadcaster ZBC showed Grace Mugabe greeting government and military officials at the Harare airport after returning on an Air Zimbabwe plane with her husband, who had attended a summit of southern African leaders in Pretoria. The Mugabe couple did not attend a state funeral for a senior ruling party official later in the day in the Zimbabwean capital; the president usually presides over such events.

South Africa's foreign minister, Maite Nkoana-Mashabane, granted immunity to Grace Mugabe in a government gazette notice that was published Sunday. Signed on Saturday, the notice recognises "the immunities and privileges of the First Lady of the Republic of Zimbabwe, Dr Grace Mugabe".

South African police had previously issued a "red alert" at borders to ensure she didn't leave undetected and had said they were waiting for a government decision on the immunity appeal.

The country's main opposition party, the Democratic Alliance, called for a parliamentary inquiry into South Africa's decision to let the Zimbabwean first lady leave and said on Twitter that the government has "no more legitimacy in the arena of international diplomacy and displays a total disregard for the rule of law".

John Steenhuisen, a senior opposition official, compared the South African handling of the Mugabe case to the government's decision to allow Sudanese President Omar al-Bashir to leave the country in 2015 even though he was wanted by the International Criminal Court for alleged war crimes, the African News Agency reported.

Gabriella Engels, a 20-year-old model, said Grace Mugabe attacked her on August 13, whipping her with an extension cord that cut her forehead.

In reaction to the news that Mugabe had returned to Zimbabwe, a group representing Engels said yesterday it would go to court to challenge the South African government over the immunity issue.