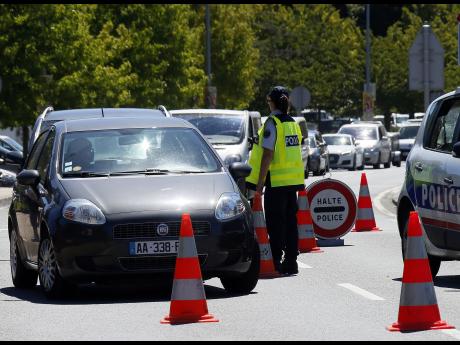 Bob Edme
A French police officer watches vehicles at the border crossing between Spain and France in Behobie, near Urrugne, southwestern France yesterday.

The lone fugitive from the Spanish cell that killed 15 people in and near Barcelona was shot to death yesterday after he flashed what turned out to be a fake suicide belt at two troopers who confronted him in a vineyard just outside the city he terrorized, authorities said.

Police said they had "scientific evidence" that Younes Abouyaaqoub, 22, drove the van that barreled through Barcelona's crowded Las Ramblas promenade, killing 13 people on Thursday, then hijacked a car and fatally stabbed its driver while making his getaway.

Abouyaaqoub's brother and friends made up the rest of the 12-man extremist cell, along with an imam who was one of two people killed in what police said was botched bomb-making operation.

After four days on the run, Abouyaaqoub was spotted outside a train station about 52 kilometers (33 miles) west of Barcelona on Monday afternoon. A second witness told police she was certain she had seen the man whose photo has gone around the world as part of an international manhunt.

Two officers found him hiding in a nearby vineyard and asked for his identification, according to the head of the Catalan police. He was shot to death when he opened his shirt to reveal what looked to be explosives and cried out "Allah is great" in Arabic, regional police chief Josep Luis Trapero said.

A bomb disposal robot was dispatched to examine the downed suspect before police determined the bomb belt was not real, Trapero said. A bag full of knives was found with his body, police said.

"The arrest of this person was the priority for the police because it closed the detention and dismantling of the group that we had identified," he said.

Four are under arrest, and eight are dead: five shot by police in the seaside town of Cambrils, where a second van attack left one pedestrian dead early Friday; two others killed on the eve of the Barcelona attack in a botched bomb-making operation; and Abouyaaqoub.