Boy helps save brother after quake 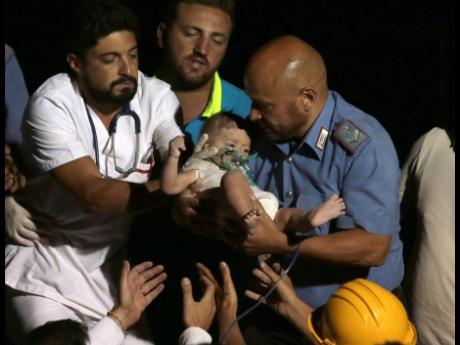 STRINGER
Rescuers pull out seven-month boy Pasquale from the rubble of a collapsed building in Casamicciola, on the island of Ischia, near Naples, Italy, a day after a 4.0-magnitude quake hit the Italian resort island yesterday.

An Italian family of five was "reborn" after all three children buried in the rubble of their home by a 4.0-magnitude quake were pulled to safety Tuesday in a painstaking 16-hour rescue operation on the popular Mediterranean resort island of Ischia.

The Toscano family's happy ending brought cheers from the dozens of firefighters who worked through the night to extricate the two boys and their infant brother, trapped alone for hours after their father was rescued and their pregnant mother managed to free herself from their collapsed apartment in the hard-hit town of Casamicciola.

"I don't know how to define it if not a miracle," the boys' grandmother, Erasma De Simone, said after the family was reunited at a hospital. "We were all dead, and we are reborn."

Though relatively minor in magnitude, the quake Monday night killed two people, injured another 39 and displaced some 2,600 people in Casamicciola and the neighboring town of Lacco Ameno on the northern end of the island.

The damage in Ischia focused attention on two recurring themes in quake-prone Italy: seismically outdated old buildings and illegal new construction with shoddy materials. One woman was killed by falling masonry from a church that had suffered damage in a quake centred in Casamicciola in 1883 that killed more than 2,000 people. Another died in the same apartment complex where the family was saved.

Rescuers hailed the courage of the older boys, who spent 14 and 16 hours respectively waiting to be freed, talking with firefighters all the while, eventually receiving water and a flashlight. One official credited the older boy, 11-year-old Ciro, with helping save his 8-year-old brother, Mattias, by pushing him out of harm's way under a bed.