Government angered by US aid cut over human rights concerns 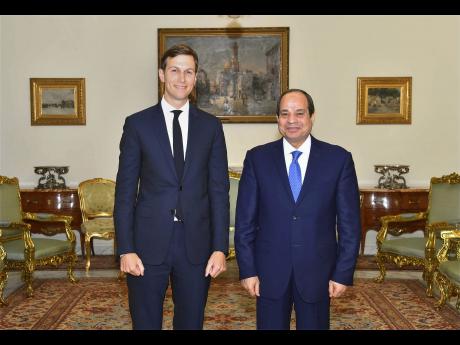 Egypt reacted angrily yesterday to the Trump administration's decision to cut or delay nearly $300 million in military and economic aid over human rights concerns, a surprise move given the increasingly close ties that have bound the two allies since President Donald Trump took office in January.

Hours after the United States (US) announcement, Trump's Middle East envoy, son-in-law Jared Kushner, arrived in Egypt as part of a Middle East tour to try to revive Arab-Israeli peace talks. He met with President Abdel-Fattah el-Sissi and later conferred with Foreign Minister Sameh Shoukry before leaving for Israel.

In a statement, the Egyptian Foreign Ministry said Cairo regretted the US decision, calling it a "misjudgment of the nature of the strategic relations that have bound the two countries for decades." The move, it said, "reflects a lack of careful understanding of the importance of supporting the stability and success of Egypt, as well as the size and nature of the security and economic challenges faced by the Egyptian people".

It warned that the cuts may have "negative consequences for the realization of common US-Egyptian interests". It did not elaborate.

However, an Egyptian presidential statement on Kushner's meeting with el-Sissi made no mention of the aid cuts and delays, which totalled $290.7 million. El-Sissi, a general-turned-president who has repeatedly stated his admiration for Trump, showed none of the frustration expressed by the Foreign Ministry as he smiled while posing for a ceremonial photo with Kushner in the Egyptian leader's opulent Cairo palace.

El-Sissi spoke to Kushner and his delegation about "Egypt's keenness to continue to work on strengthening the multi-faceted relations that bind the two countries in various fields," the statement said.