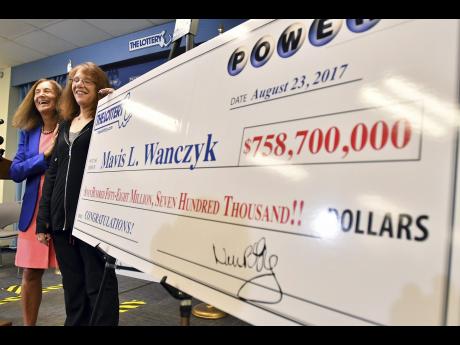 Josh Reynolds
Mavis Wanczyk, of Chicopee, Massachusetts, stands by a poster of her winnings during a news conference where she claimed the $758.7 million Powerball prize at Massachusetts State Lottery headquarters yesterday.

A 53-year-old Massachusetts hospital worker stepped forward yesterday to claim the biggest undivided lottery jackpot in US history - a $758.7 million Powerball prize - after breaking the news to her employer the way the rest of us only dream of: "I called and told them I will not be coming back.

"The first thing I want to do is just sit back and relax," Mavis L. Wanczyk told reporters at a news conference.

Wanczyk chose to take a lump-sum payment of $480 million, or $336 million after taxes, lottery officials said. Winners who take a gradual payout stand to get more money spread out over several decades.

Even after paying taxes on the winnings, Wanczyk is worth more than some small countries such as Micronesia, which has a gross domestic product of $322 million, or the Pacific islands of Palau, with a GDP of $293 million, according to 2016 figures from the World Bank.

The previous evening, she recalled, she was leaving work with a firefighter and remarked: "It's never going to be me. It's just a pipe dream that I've always had."

Then she read the number on her ticket and realised she had won.

Wanczyk worked for 32 years in a clerical job in the nursing department at Mercy Medical Center in Springfield, the hospital said.

About a month ago, she shared a post on Facebook, joking that she needed a vacation. "And by 'vacation'," the post read, "I mean I need to move away and find a new job. On a beach. With rum."

The jackpot is the largest ever won with a single ticket. It is the second-largest US lottery prize, ahead of a $656-million Mega Millions prize won by three people in 2012. But Wednesday's big prize is still dwarfed by a $1.6 billion Powerball jackpot divvied up between three winners in January 2016.

Wanczyk has two adult children, a daughter and a son.