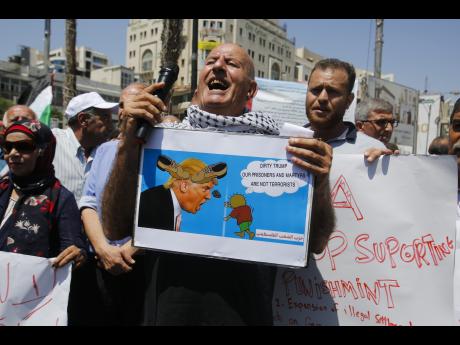 Nasser Shiyoukhi
A Palestinian activist holds a collage showing US President Donald Trump during a protest against the visit of US delegation in the West Bank city of Ramallah yesterday.

Presidential adviser Jared Kushner met with Israeli and Palestinian leaders yesterday to try to jumpstart moribund peace talks, but after months without progress, the Mideast envoy faces growing scepticism on the Palestinian side.

The Palestinians initially welcomed Trump's election, but they have since grown impatient with what they say is a failure by the US president to present a roadmap for peace. Specifically, they are seeking a halt to Israeli settlement construction on occupied lands, and an American commitment to the establishment of an independent Palestinian state as part of a peace deal with Israel.

"If the US team doesn't bring answers to our questions this time, we are going to look into our options because the status quo is not working for our interests," said Ahmad Majdalani, an aide to Abbas.

It was not clear whether Kushner offered any clarity during his three-hour meeting with Abbas. Nabil Abu Rdeneh, Abbas' spokesman, called the meeting "positive", without discussing details, and said the Palestinian leader had reiterated his desire for an American commitment to a Palestinian state.