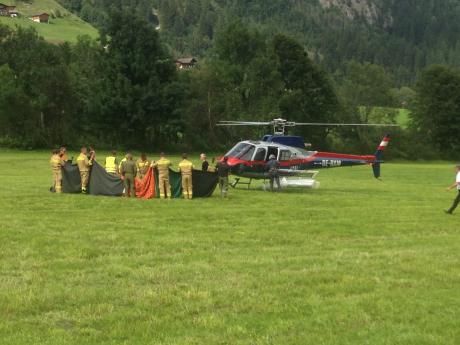 Rescue workers stand next to a police helicopter in Krimml in the Austrian province of Salzburg yesterday.

Eight mountain climbers have died in three different accidents on the weekend in the Austrian and Italian Alps.

The six were roped together when they fell in a very remote area of the mountain at an altitude of about 2,000 metres (6,562 feet). The lone survivor was taken by helicopter to a hospital in Salzburg and is in stable condition, public broadcaster ORF reported.

Apparently, one member of the group slipped and fell on a glacier, bringing the others down with him, the head of the rescue teams, Martin Reichholf, said. The group fell down 200 metres on a steep slope covered with ice and debris.

One of the climbers who died was identified as a 34-year-old man from the German state of Bavaria, and all five of those killed were likely from Germany, the German news agency dpa reported.

Climbers Fall into a crevasse

Three Italian mountain climbers also died this weekend, two of them on Sunday after falling into a crevasse in the Italian Alps. The Italian news agency ANSA said one of the crevasse victims had been rescued Sunday in grave condition, but later died.

The accident involved a group of nine mountaineers roped together while climbing on a glacier in Adamello Brenta Park near Trento in northern Italy. All of the climbers, including two 13-year olds, were injured, ANSA reported.

The group was believed to be made up of two families from northern Italy. What caused the two to fall wasn't immediately known, ANSA said..

Another Italian climber died Saturday after being hit by boulders in the Valtellina Alpine area, further west of Trento near the border with Switzerland.