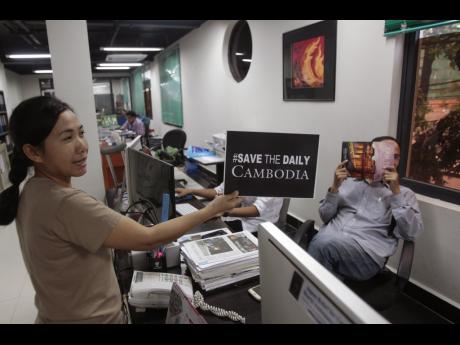 In this September 1 photo a staff of The Cambodia Daily holds a sign which reads 'Save the daily Cambodia' in her office, in Phnom Penh, Cambodia. The paper’s owners said they were forced to close because of “extra-legal threats by the government,” a reference to a $6 million tax bill they say authorities contrived with no audit and a single purpose - to shut them down. - AP

PHNOM PENH, Cambodia (AP):
When Cambodia's main opposition leader was arrested over the weekend in a surprise police raid, one of the country's last independent media outlets rushed reporters out in the middle of night to cover the story, just as it has done for nearly a quarter century.

But the English-language Cambodia's Daily's reportage about the arrest of Kem Sokha, who stands accused by the government of treason, was a tragic story in and of itself: it was to be the paper's last.

On Monday the venerable broadsheet, which has helped pioneer press freedom and train generations of journalists since it was founded in 1993, appeared in newsstands for the last time — the latest victim of a determined push by the government of Prime Minister Hun Sen to silence critics in the run-up to 2018 elections.

The paper's owners said they were forced to close because of "extra-legal threats by the government," a reference to a $6 million tax bill they say authorities contrived with no audit and a single purpose — to shut them down.

"It's terrible, it's frustrating," said Chhorn Chansy, who worked for a decade at the paper as a reporter and news editor. "We normally write about others. We can't believe that this happened to us."

During its 24-year-run, the Cambodia Daily served as a model for budding journalists, its stories offering a window into a growing nation that is still emerging from decades of conflict and genocide. About half the Daily's 30 editorial staff were Cambodian; the other half were foreigners drawn from around the world.

The paper, which included a Khmer-language section, acquired a reputation for hard-hitting investigations in a nation where such things were rare. It was also a consistent thorn in Hun Sen's side. Its final front-page headline, "Descent into Outright Dictatorship," ran above a story about Kem Sokha's arrest.

Below the piece was another announcing Monday's edition would be its last.

"It's hard to imagine that after working for so hard for so long, these journalists just have to walk away," she said.

The Daily's fate is part of a much broader government crackdown on critics that has intensified dramatically in recent weeks and left many wondering where the nation is headed. It's also part of a major shift away from American influence, which has waned for years as Cambodia edges closer to China.

Last month, authorities expelled the Washington-based National Democratic Institute and ordered at least a dozen radio stations shut down for allegedly violating broadcasting agreements. Although Ouk Kimseng, an information ministry spokesman, said the government was simply enforcing the law, the stations appear to have been singled out because they gave air time to opposition politicians and to the US government-funded Voice of America and Radio Free Asia, which have also been accused by authorities of failing to pay taxes.

The stations were among only a few in the country considered independent, and their closure will have a profound impact on the ability of rural populations — which comprise a majority of the country — to obtain contrarian views. "How will the Cambodian people be able to evaluate or access real information?" asked Yi Chhorvorn, managing director of Mohanokor Radio, which was among those shuttered with little explanation.

Mu Sochua, a senior member of the opposition party, said the fate of the free press and the arrest of Kem Sokha are part of a government strategy aimed at clearing the stage for Hun Sen ahead of elections next year.

"They think that any voice that is critical has to be eliminated — the media, independent analysts, human rights groups, trade unions, the opposition."

But free speech, she said, is critical for Cambodia to grow. "This is not about winning or not winning. It's about giving democracy a chance."

Although Cambodia is nominally a democratic state, its institutions remain fragile and the rule of law weak. Hun Sen, one of the world's longest-serving rulers, has been in office since 1985 and has held tightly onto it since.