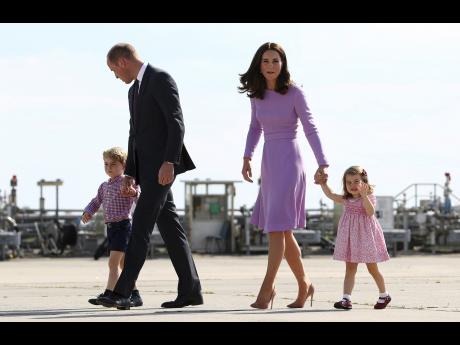 AP
In this Friday, July 21, 2017 file photo Britain's Prince William, second left, and his wife Kate, the Duchess of Cambridge, second right, and their children, Prince George, left, and Princess Charlotte, right are on their way to board a plane in Hamburg, Germany.

Prince William and his wife, the Duchess of Cambridge, will soon welcome a third child to the royal nursery.

Kensington Palace officials announced yesterday that the former Kate Middleton is pregnant, but was not feeling well enough to attend an engagement later in the day.

As with her other two pregnancies, she is suffering from hyperemesis gravidarum, or acute morning sickness. She is being cared for at the royal couple's apartment in London's Kensington Palace.

The sickness failed to dampen the buoyant mood among the royals, however.

"The queen and members of both families are delighted with the news," the palace said in a statement.

No details were immediately available about when the third baby is due, though the duchess is less than 12 weeks pregnant. That would put the due date somewhere between mid-March and mid-June.

The announcement comes as the royal couple prepared to mark another milestone for their young family: Prince George is scheduled to start school Thursday at Thomas's Battersea in south London.

Their choice of a south London school indicated that the royal couple was settling into their Kensington Palace apartment, having moved recently from their Norfolk home, Anmer Hall.

Betting agencies were quick to start offering odds on possible names for the soon-to-be addition to the House of Windsor.

Paddy Power offered 8-to-1 odds on Alice and 10-to-1 odds on Arthur. Also popular is Diana, after Prince William's mother, particularly given the timing of the announcement.

William and Kate took a leading role in marking the 20th anniversary of Diana's death last week. The couple, joined by William's brother, Prince Harry, toured the garden of Kensington Palace to commemorate the princess's contributions to their family and the many charities she supported.