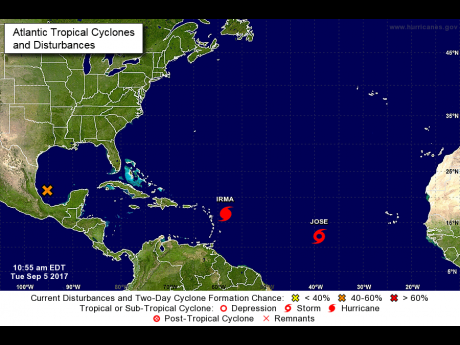 BRIDGETOWN, Barbados (CMC):
Residents in the Windward Islands – Dominica, Grenada, St Lucia and St Vincent and the Grenadines – were being urged to follow the path of Tropical Storm Jose as the 10th tropical storm of the 2017 Atlantic Hurricane season formed on Tuesday.

The Miami based National Hurricane Center (NHC) said that Jose was located 1,505 miles east of the Lesser Antilles and was moving west north west at 13 miles per hour (mph)

It has maximum sustained winds of 40 mph and NHC said that while there are no coastal watches or warnings in effect, interests in the Leeward Islands should monitor the future progress of Jose.

“Jose is moving towards the west-northwest near 13 mph and a movement toward the west or west-northwest at a slightly faster rate of forward speed is expected during the next two days,” NHC said, warning that “some strengthening is forecast during the next 48 hours and Jose could become a hurricane by Friday.

The Leeward Islands – Antigua and Barbuda, St Kitts-Nevis, Anguilla, Montserrat – are already bracing for the passage of Hurricane Irma which is packing winds in excess of 180 mph and could hit the region later on Tuesday.