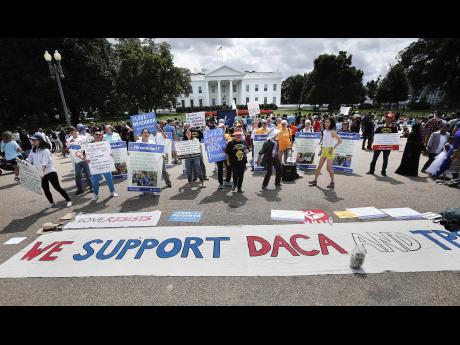 AP
In this Sunday, September 3, 2017 photo, supporters of Deferred Action for Childhood Arrivals programme demonstrate on Pennsylvania Avenue in front of the White House in Washington.

President Donald Trump's administration will "wind down" a programme protecting hundreds of thousands of young immigrants who were brought into the country illegally as children, Attorney General Jeff Sessions declared yesterday, calling the Obama administration's programme "an unconstitutional exercise of authority".

The Government will stop processing new applications under President Barack Obama's Deferred Action for Childhood Arrivals, or DACA, programme, which has provided nearly 800,000 young immigrants a reprieve from deportation and the ability to work legally in the US.

But the administration is giving Congress six months to come up with a legislative fix before the Government stops renewing permits for people already covered by the programme.

"Societies where the rule of law is treasured are societies that tend to flourish and succeed," Sessions said.

Trump suggested in an earlier tweet that it would be up to Congress to ultimately decide the fate of those now protected by the programme. He tweeted, "Congress, get ready to do your job - DACA!"

"Make no mistake, we are going to put the interest of AMERICAN CITIZENS FIRST!" Trump added in a second, retweeted message. "The forgotten men & women will no longer be forgotten."

Sessions' announcement came the same day as a deadline set by a group of Republican state officials who said they would challenge DACA in court unless the Trump administration rescinded the programme.

Many believe the programme would not hold up in court.

Trump's plan to take a harder line on young immigrants unless Congress intervenes threatens to emphasise deep divisions among Republicans who have long struggled with the issue, with one conservative warning of a potential "civil war" within the party. Congressional Republicans have a long history of being unable to act on immigration because of those divisions.