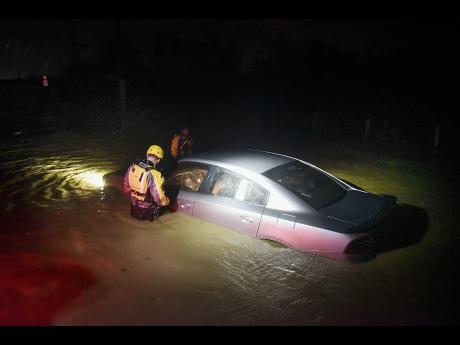 AP
Rescue staff from the Municipal Emergency Management Agency investigate an empty flooded car during the passage of Hurricane Irma through the northeastern part of the island in Fajardo, Puerto Rico, Wednesday. 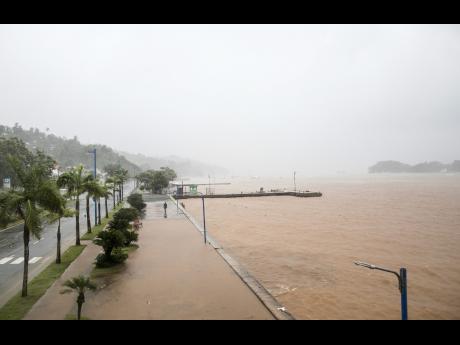 Fearsome Hurricane Irma cut a path of devastation across the northern Caribbean, leaving at least 10 dead and thousands homeless after destroying buildings and uprooting trees on a track yesterday that could lead to a catastrophic strike on Florida.

The most potent Atlantic Ocean hurricane ever, Irma weakened only slightly yesterday morning and remained a powerful Category 5 storm with winds of 180 mph (285 kph), according to the US National Hurricane Center.

The storm was increasingly likely to rip into heavily populated South Florida early Sunday, prompting the governor to declare an emergency and officials to impose mandatory evacuation orders for parts of the Miami metro area and the Florida Keys. Forecasters said it could punish the entire Atlantic coast of Florida and rage on into Georgia and South Carolina. The Keys and parts of South Florida were placed under a hurricane watch yesterday.

"This could easily be the most costly storm in US history, which is saying a lot considering what just happened two weeks ago," said Brian McNoldy, a hurricane researcher at the University of Miami, alluding to the damage caused by Hurricane Harvey.

French Interior Minister Gerard Collomb told France Info radio that eight had died and 23 injured in the country's Caribbean island territories, and he said the toll on Saint-Martin and Saint-Barthelemy could be higher because rescue teams have yet to finish their inspection of the islands.

"The reconnaissance will really start at daybreak," Collomb said.

At a news conference, Collomb also said 100,000 food rations have been sent to the islands, the equivalent of four days of supplies.

"It's a tragedy, we'll need to rebuild both islands," he said. "Most of the schools have been destroyed."

'It is just really a horrendous situation'

In the United Kingdom, the Government said Irma inflicted "severe, and in places, critical" damage to the British overseas territory of Anguilla. Foreign Office Minister Alan Duncan said the Caribbean island took the full force of the hurricane. He told lawmakers yesterday that the British Virgin Islands have also suffered "severe damage".

Irma blacked out much of Puerto Rico, raking the U.S. territory with heavy wind and rain while staying just out to sea, and it headed early yesterday towards the Dominican Republic and Haiti.

To the east, authorities struggled to get aid to small Caribbean islands devastated by the storm's record 185 mph (298 kph) winds. Communications were difficult with areas hit by Irma, and information on damage trickled out.

Nearly every building on Barbuda was damaged when the hurricane's core crossed almost directly over the island early Wednesday, and about 60 per cent of its roughly 1,400 residents was left homeless, Antigua and Barbuda Prime Minister Gaston Browne told the Associated Press (AP).

"It is just really a horrendous situation," Browne said after returning to Antigua from a plane trip to the neighbouring island.

He said roads and telecommunications systems were wrecked and recovery would take months, if not years. A two-year-old child was killed as a family tried to escape a damaged home during the storm, Browne told the AP.

One death also was reported in the nearby island of Anguilla, where officials reported extensive damage to the airport, hospitals, shelters and school and said 90 per cent of roads are impassable, according to the Caribbean Disaster Emergency Management Agency.

The agency also reported "major damage" to houses and commercial buildings in the British Virgin Islands.