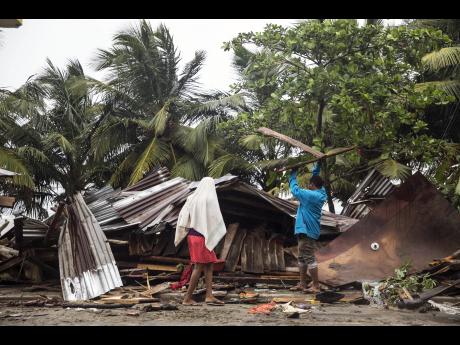 AP
A man begins the task of rebuilding his home after it was damaged by Hurricane Irma in Nagua, Dominican Republic, yesterday.

Hurricane Irma's top sustained winds weakened by about 10 mph (16 kph) yesterday because of a bit of dry air and interaction with land on the island of Hispaniola, but it is still a top-of-the-scale hurricane.

And according to meteorologist Jeff Masters with Weather Underground, Irma could intensify "back up to 185 mph (298 kph) or even higher because it is headed to warmer deeper water" over the Florida straits.

Although the hurricane centre forecasts some more weakening because of upper-level winds that could arrive and fight the storm, Masters says those winds might develop too late on Sunday, after Irma has already turned north to Florida.

And Maj Jeremy DeHart has some advice for Floridians after flying through Hurricane Harvey last month and now through the eye of Irma at 10,000 feet on Wednesday.

The US Air Force Reserve weather officer says to "take it seriously .... because this is the real deal".

DeHart has flown into about 20 hurricanes, and he says he's never gone into anything quite so powerful. Or beautiful. Inside Irma's calm, cool centre, there's a stadium effect, with thunderstorms flashing on the surrounding eyewall. He calls it "spectacular," and says the "satellite images can't do it justice".

The fate of Florida depends on when and how Hurricane Irma makes a right turn.

National Weather Service Director Louis Uccellini says forecasters have no doubt, it will turn in the days ahead. If it's an early, sharp turn, Irma is more likely to keep closer to the peninsula's eastern shore or even over water as it churns north.

But if it turns later and more widely, the centre of Irma and its maximum destructive capacity would move inland.