Pope to Colombians: There has been too much hatred, violence 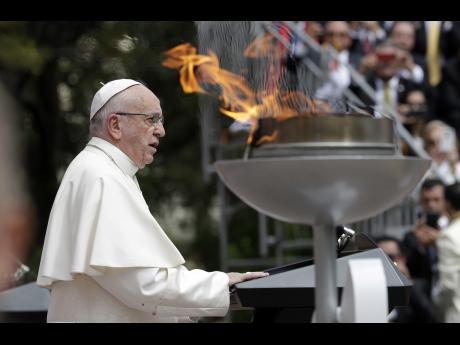 AP
Pope Francis speaks next to a 'reconciliation flame' during a ceremony at the presidential palace in Bogota, Colombia, yesdterday.

"There has been too much hatred and violence," Francis told a crowd at Bogota's presidential palace that included soldiers with amputated limbs and disabled children.

Francis received a raucous welcome on his first full day in Colombia, with young choir members abandoning their positions in the palace courtyard and throwing their arms around him as he arrived for his first event of the day. History's first Latin American Pope took the protocol and security breaches in stride, relishing in the adoration of one of the continent's most staunchly Roman Catholic countries.

In his speech, Francis appealed to President Juan Manuel Santos and Colombia's political, cultural and economic elite to avoid the temptation to seek vengeance as the country emerges from the conflict and works to rebuild. Instead, he urged them to commit themselves to "heal wounds, build bridges, strengthen relationships and support one another".

One year after the Government signed a peace accord with rebels of the Revolutionary Armed Forces of Colombia, better known by its Spanish acronym FARC, the guns have been silenced and 7,000 rebels are transitioning back to civilian life. But Colombians remain badly divided over the accord, with conservative opponents seeing it as too generous for the guerrillas, who were behind scores of atrocities during the conflict.