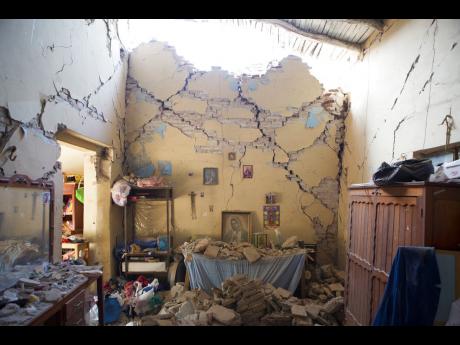 An altar to the Virgin of Guadalupe is covered with fallen debris inside the earth-damaged home where Larissa Garcia, 24, lived with her family in Juchitan, Oaxaca state, Mexico, on Saturday. - AP Photo

JUCHITAN, Mexico (AP):
One of the most powerful earthquakes ever to hit Mexico was followed by a Gulf coast hurricane, dealing a one-two punch to the country that killed at least 63 people as workers scrambled Saturday to respond to the twin national emergencies.

The 8.1 quake off the southern Pacific coast just before midnight Thursday toppled hundreds of buildings in several states. Hardest-hit was Juchitan, Oaxaca, where 36 people died and a third of the city's homes collapsed or were uninhabitable, President Enrique Pena Nieto said late Friday in an interview with the Televisa news network.

In downtown Juchitan, the remains of brick walls and clay tile roofs cluttered streets as families dragged mattresses onto sidewalks to spend a second anxious night sleeping outdoors. Some were newly homeless, while others feared further aftershocks could topple their cracked adobe dwellings.

"We are all collapsed, our homes and our people," said Rosa Elba Ortiz Santiago, 43, who sat with her teenage son and more than a dozen neighbours on an assortment of chairs. "We are used to earthquakes, but not of this magnitude."

Even as she spoke, across the country, Hurricane Katia was roaring onshore north of Tecolutla in Veracruz state, pelting the region with intense rains and maximum sustained winds of 75 mph (120) kph.

Veracruz Gov. Miguel Angel Yunes said two people died in a mudslide related to the storm, and he said some rivers had risen to near flood stage, but there were no reports of major damage.

Veracruz and neighbouring Puebla states evacuated more than 4,000 people ahead of the storm's arrival.

The Hurricane Center said Katia could still bring 3 to 6 inches (7.5 to 15 centimetres) of additional rain 25 to 37 centimetres) to a region with a history of deadly mudslides and flooding.

Pena Nieto announced Friday that the earthquake killed 45 people in Oaxaca state, 12 in Chiapas and 4 in Tabasco, and he declared three days of national mourning. The toll included 36 dead in Juchitan, located on the narrow waist of Oaxaca known as the Isthmus, where a hospital and about half the city hall also collapsed into rubble.

Next to Ortiz, 47-year-old Jose Alberto Martinez said he and family members have long been accustomed to earthquakes. So when the ground started moving, at first they simply waited a bit for it to stop — until objects began falling and they bolted for the street.

"We felt like the house was coming down on top of us," Martinez said, accompanied by his wife, son and mother-in-law.

Now, he didn't feel safe going back inside until the home is inspected. Right next door, an older building had crumbled into a pile of rough timbers, brick and stucco, while little remained of a white church on the corner.

Rescuers searched for survivors Friday with sniffer dogs and used heavy machinery at the main square to pull rubble away from city hall, where a missing police officer was believed to be inside.

The city's civil defense coordinator, Jose Antonio Marin Lopez, said similar searches had been going on all over the area.eeted.