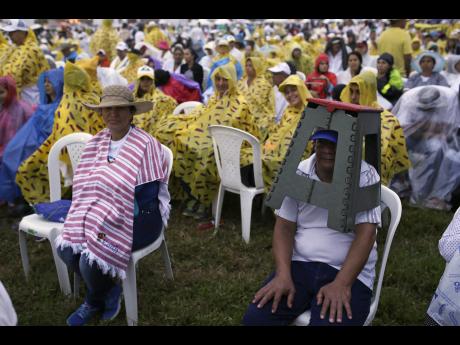 AP
People wait under a light rain for the start of a Holy Mass to be celebrated by Pope Francis, in Villavicencio, Colombia, yesterday. (AP)

Pope Francis travelled yesterday to an area once besieged by leftist rebels to pray with victims of Colombia's long conflict and urge them to overcome their grief by forgiving their former assailants.

At an open-air Mass in the central city of Villavincencio, Francis praised those who had resisted "the understandable temptation for vengeance" and instead sought out peace. He said their choice in no way legitimised the injustices they suffered, but rather showed a willingness to build a peaceful future together.

"Every effort at peace without sincere commitment to reconcili-ation is destined to fail," he warned.

The highlight of his daylong visit was to be what the Vatican has termed a "great prayer meeting for national reconciliation", bringing victims and victimisers together before a poignant symbol of the conflict: a mutilated statue of Christ rescued from a church destroyed in a rebel mortar attack.

It was bound to be a deeply emotional gathering for Francis, who has made reconciliation the central theme of his five-day visit to Colombia after promising to visit the country upon the signing of last year's peace deal with the Revolutionary Armed Forces of Colombia.

The event was drawing thousands of victims from all walks of life: soldiers who lost limbs clearing landmines, mothers whose children were forcibly recruited by the rebels never to be seen again, and farmers driven off their land by right-wing paramilitary groups.

Ahead of the event, the former commander of the FARC published a public letter in which he asked Francis for forgiveness.

"Your frequent reminders about the infinite mercy of God move me to beg for your forgiveness for any tear or pain we've caused Colombian society or any of its individuals," wrote Rodrigo Londono, better known by his nom de guerre Timochenko.

The longtime rebel commander, who is undergoing medical treatment in Cuba following a stroke, said he regretted that he was unable to be present for Francis' visit. Declaring himself a "devout admirer" of the first Latin American pope, he praised Francis' insistence on the dignity of every human being and outspoken criticism of an economic system in which rich nations loot the riches of poorer ones.

Pope to Colombians: There has been too much hatred, violence
Pope saw psychoanalyst to seek 'clarity' years ago
Pope again flexes papal muscle to keep tabs on cardinals
Pope decries 'vile' attack on Syrians in address
Pope calls for severe punishment for child molesters