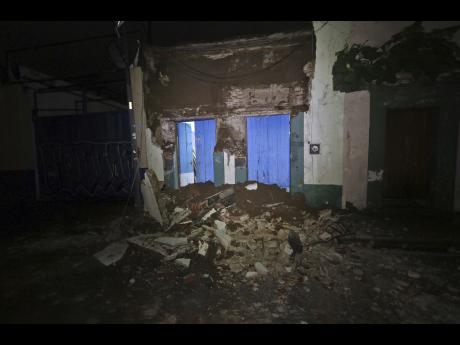 AP
Debris from a collapsed wall sits in Oaxaca, Mexico, after an earthquake early Friday,yesterday.

One of the most powerful earthquakes ever to strike Mexico has hit off its southern Pacific coast, killing at least 32 people, toppling houses, government offices and businesses while sending panicked people into the streets more than 650 miles (1,000 kilometres) away.

The US Geological Survey (USGS) said the earthquake hit off Chiapas state near the Guatemalan border with a magnitude of 8.1 slightly stronger than the magnitude 8 quake of 1985 that killed thousands and devastated large parts of Mexico City.

Oaxaca state Governor Alejandro Murat told local news media that at least 23 people had died in his coastal state. Civil defence officials said at least seven died in Chiapas and two others in the Gulf coast state of Tabasco.

Hundreds of buildings collapsed or were damage, power was cut at least briefly to more than 1.8 million people, and authorities closed schools Friday in at least 11 states to check them for safety.

"The house moved like chewing gum and the light and Internet went out momentarily," said Rodrigo Soberanes, who lives near the Chiapas state city of San Cristobal de las Casas.

The US Geological Survey recorded at least 20 aftershocks of magnitude 4.0 or greater within about five hours after the main shake, and the president warned that a major aftershock as large as magnitude 7.2 could occur.

The quake caused buildings to sway violently in Mexico's capital more than 650 miles (1,000 kilometres) away. As beds banged against walls, people still wearing pyjamas fled into the streets, gathering in frightened groups.

Chiapas Governor Manuel Velasco said that three people were killed in San Cristobal, including two women who died when a house and a wall collapsed. He called on people living near the coast to leave their houses as a protective measure.

"There is damage to hospitals that have lost energy," he said. "Homes, schools and hospitals have been damaged."

Tabasco Governor Arturo Nunez said one child died in his state when a wall collapsed, and the other was an infant who died in a children's hospital that lost electricity, cutting off its ventilator.

Quake, aftershock have some sleeping outside
Earth Today | Research key to Jamaica’s earthquake readiness
Earth Today | Met Service clears the air on tsunami warning
Preparing for the inevitable - With 200,000 earthquakes each year, Japan has lessons for Jamaica
Eastern Parishes on High Alert