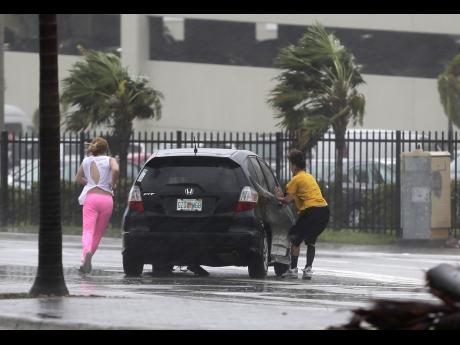 AP
Stranded motorists try to get back in their car after a breakdown as Hurricane Irma bears down on the Florida Keys, yesterday in Hialeah, Florida. Wind gusts of 82 mph were reported in Miami.

Ahead of the arrival of what is potentially one of the most devastating storms to ever hit Florida, officials have set aside 3.2 million litres (0.85 million gallons) of water, filled 67 trailers with meals, and amassed 24,000 tarps. They also have asked the federal government to kick in 11 million meals and millions more litres (gallons) of water, plus nearly 700 cases of baby supplies.

When it is finally safe for emergency officials to fan out across the peninsula, they will find out whether that is enough.

Hurricane Irma made landfall in the Florida Keys yesterday morning with top sustained winds of 130mph (215kph). While the projected track showed Irma raking the state's Gulf Coast, forecasters warned that the entire Florida peninsula - including the Miami metropolitan area of six million people - was in extreme danger from the monstrous storm, almost 400 miles (640 kilometers) wide. Nearly seven million people in the Southeast were warned to get out of the storm's path, including 6.4 million in Florida alone.

A weary Governor Rick Scott, who has flown across the state during the past five days sounding the alarm bell ahead of landfall, acknowledged that it won't be easy for residents in the days ahead. Florida has long dealt with hurricanes, including a stretch of eight hurricanes in two years while Jeb Bush was governor, but Irma's wide reach has proved daunting.

"I don't think anybody alive today in this state has ever seen anything like this," Scott said at the state's emergency operations centre when the first parts of the storm started to cross into the Florida Keys.