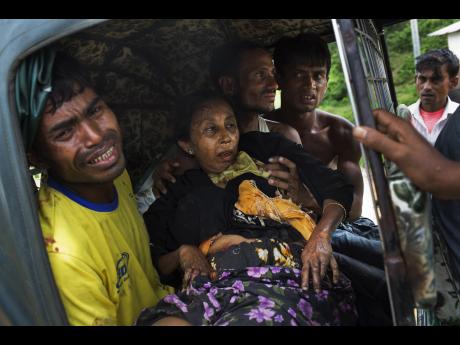 AP
An injured elderly woman and her relatives rush to a hospital on an autorickshaw, near the border town of Kutupalong, Bangladesh, last week. The Rohingya woman encountered a landmine that blew off the right leg while trying to cross into Bangladesh.

Myanmar's military has been accused of planting land mines in the path of Rohingya Muslims fleeing violence in its western Rakhine state, with Amnesty International reporting two people wounded on Sunday.

Refugee accounts of the latest spasm of violence in Rakhine have typically described shootings by soldiers and arson attacks on villages. But there are at least several cases that point to anti-personnel land mines or other explosives as the cause of injuries on the border with Bangladesh, where 300,000 Rohingya have fled in the past two weeks.

AP reporters on the Bangladesh side of the border on Monday saw an elderly woman with devastating leg wounds: one leg with the calf apparently blown off and the other also badly injured. Relatives said she had stepped on a land mine.

Myanmar has one of the few militaries, along with North Korea and Syria, which has openly used anti-personnel land mines in recent years, according to Amnesty. An international treaty in 1997 outlawed the use of the weapons.

Lt Col S.M. Ariful Islam, commanding officer of the Bangladesh border guard in Teknaf, said on Friday that he was aware of at least three Rohingya injured in explosions.

Bangladeshi officials and Amnesty researchers believe that new explosives have been recently planted, including one that the rights group said blew off a Bangladeshi farmer's leg and another that wounded a Rohingya man. Both incidents occurred on Sunday. It said that at least three people, including two children, were injured in the past week.

"It may not be land mines, but I know there have been isolated cases of Myanmar soldiers planting explosives three to four days ago," Ariful said Friday.

Amnesty said that based on interviews with eyewitnesses and analysis by its own weapons experts, it believes that there is "targeted use of landlines" along a narrow stretch of the north-western border of Rakhine state that is a crossing point for fleeing Rohingya.