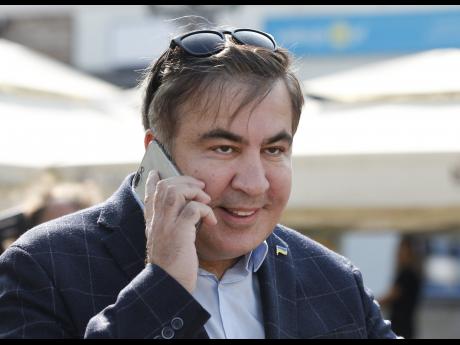 AP
Former Georgian President and former Ukraine official, Mikheil Shaakashvili speaks on a mobile phone in the south-eastern city of Rzeszow, Poland, yesterday before setting off in an attempt to return to Ukraine although both his Ukrainian and Georgia passports are no longer valid.

Mikheil Saakashvili and a small crowd of supporters shoved their way through a line of guards at the Ukrainian border on Sunday, making good on the politician's vow to return to the land that had stripped him of citizenship.

The return of the divisive and headstrong Saakashvili, who became governor of Ukraine's Odessa region after being Georgian president from 2004-2013, poses a strong challenge to Ukrainian Petro Poroshenko, who once was Saakashvili's patron but then revoked his citizenship in July.

Saakashvili was appointed to the Odessa post in 2015 on the strength of his record of fighting corruption in Georgia. However, he resigned the post after only 18 months, complaining that official corruption in Ukraine was so entrenched he could not work effectively.

The return carries risks for Saakashvili, who is stateless. Georgia, where he faces accusations of abuse of power and misappropriation of property, has sent an extradition request for him to Ukraine. It is not clear if Ukraine intends to honour that request.

Prosecutor-General Yuri Lutsenko said late yesterday that charges would be pursued against organisers of Saakashvili's unauthorised entry. The Ukrainian Interior Ministry said 17 police and border guards were injured in the confrontation.