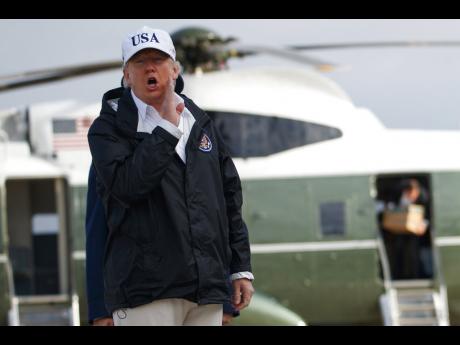 President Donald Trump responds to a reporters question as he boards Air Force One with first lady Melania Trump, not shown, for a trip to Florida to meet with first responders and people impacted by Hurricane Irma, on Thursday. – AP Photo

WASHINGTON (AP):
President Donald Trump on Thursday said he was "fairly close" to a deal with congressional leaders to preserve protections for young immigrants living illegally in America but he's insisting on "massive border security" as part of any agreement.

Trump, speaking to reporters before surveying hurricane damage in Florida, pushed back against Democratic leaders who claimed there was a deal on the Deferred Action for Childhood Arrivals (DACA) initiative. He also said his promised wall along the US-Mexico border would "come later."

Trump, in a series of early morning tweets, disputed the characterisation of a private White House dinner on Wednesday night by his guests, Sen Chuck Schumer of New York and Rep Nancy Pelosi of California, the top Democrats on Capitol Hill. Trump said there was no deal.

But speaking on the Senate floor Thursday morning, Schumer insisted that both sides were in agreement and there was no dispute.

"If you listen to the president's comments this morning ... it is clear that what Leader Pelosi and I put out last night was exactly accurate," said Schumer. "We have reached an understanding on this issue. We have to work out details, and we can work together on a border security package with the White House and get DACA on the floor quickly."

Indeed, in the face of ferocious pushback from conservative lawmakers and media outlets including Breitbart, run by former Trump adviser Steve Bannon, the White House appeared focused more on reshaping presentation of the agreement, than on denying it outright.
"By no means was any deal ever reached," White House spokeswoman Lindsay Walters told reporters aboard Air Force One as the president travelled to Florida. "This is something that Congress needs to work on".

Democratic aides said that although there was no final deal, an agreement had been reached.