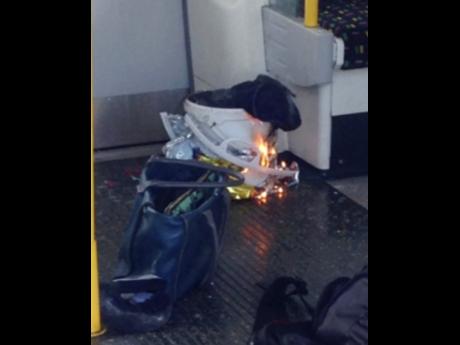 In this image made from video, fire raises at a southwest London subway station in London Friday.

LONDON (AP):
Prime Minister Theresa May says Britain's official threat level from terrorism remains at "severe", meaning an attack is highly likely, and has not been raised in the wake of the London subway bombing.

After chairing a meeting of the government's emergency committee, May said the threat level was not being raised to "critical", which would mean an attack is imminent.

She says that decision will be kept under review. The threat level was briefly raised to critical after the May 22 suicide bombing at Manchester Arena.

Authorities say 22 people were injured when an improvised bomb exploded aboard a subway train during Friday's rush hour. Most of the victims suffered flash burns, and none was seriously hurt.

Terrorism analyst Magnus Ranstorp with the Swedish Defense University says Londoners have been very fortunate because the bomb placed on a subway appears not to have fully detonated.

After studying photos of the device, he said Friday the bomb had only "partially" burned since much of the device and its casing remained intact. He said that will make it easy for police and security services to determine what chemicals and methods were used to make the bomb.

He says "they were really lucky with this one, it could have really become much worse."

He said the bomber chose to conceal the device in a bucket and a plastic shopping bag rather than a backpack. He also says, from the photos, "it seems that this was hastily put together. Probably not very well mixed together."

In all, 22 people were wounded by the bomb on Friday.