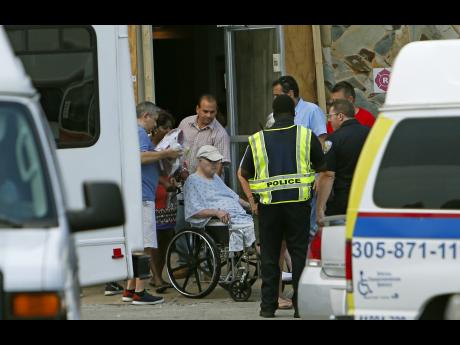 David Santiago
Patients are evacuated from Krystal Bay Nursing and Rehabilitation Center after losing power in the aftermath of Hurricane Irma, in North Miami Beach.

Florida seniors shuffled out of stifling assisted-living centers yesterday while caregivers fought a lack of air conditioning with Popsicles and cool compresses after eight people died at a nursing home in the post-hurricane heat.

Dozens of the state's senior centers still lacked electricity in the aftermath of Hurricane Irma, and several facilities were forced to evacuate. While detectives sought clues to the deaths, emergency workers went door to door to look for anyone else who was at risk.

Fifty-seven residents were moved from a suburban Fort Lauderdale assisted-living facility without power to two nearby homes where power had been restored. Owner Ralph Marrinson said all five of his Florida facilities lost electricity after Irma. Workers scrambled to keep patients cool with emergency stocks of ice and popsicles.

"FPL has got to have a better plan for power," he said, referring to the state's largest utility, Florida Power & Light. "We're supposed to be on a priority list, and it doesn't come and it doesn't come, and frankly it's very scary."

Stepped-up safety checks were conducted around the state after eight deaths at the Rehabilitation Center at Hollywood Hills, which shocked Florida's top leaders as they surveyed destruction from the punishing storm.