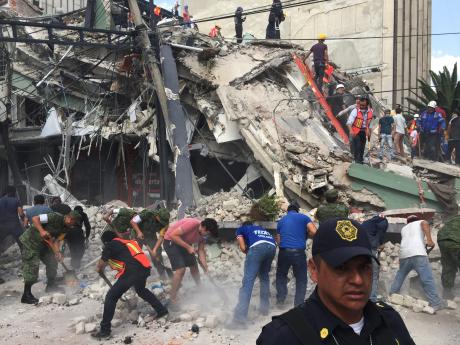 Enric Marti
People search for survivors in a collapsed building in the Roma neighborhood of Mexico City yesterday. A powerful earthquake has jolted Mexico, causing buildings to sway sickeningly in the capital on the anniversary of a 1985 quake that did major damage.

A magnitude 7.1 earthquake stunned central Mexico yesterday, killing at least 104 people as buildings collapsed in plumes of dust. Thousands fled into the streets in panic, and many stayed to help rescue those trapped.

Mancera said at least 30 had died in Mexico City, and officials in Morelos, just to the south, said 54 had died there.

At least 11 others died in Puebla state, according to Francisco Sanchez, spokesman for the state's Interior Department.

Gov. Alfredo del Mazo said at least nine had died in the State of Mexico, which also borders the capital.

The quake came less than two weeks after another quake left 90 dead in the country's south, and it occurred as Mexicans commemorated the anniversary of a 1985 quake that killed thousands.

The quake caused buildings to sway sickeningly in Mexico City and sent people throughout the city fleeing from homes and offices, and many people remained in the streets for hours, fearful of returning to the structures.

US Geological Survey seismologist Paul Earle noted that the epicenters of the two quakes are 400 miles (650 kilometers) apart and most aftershocks are within 100 kilometers.

There have been 19 earthquakes of magnitude 6.5 or larger within 250 kilometers of yesterday's quake in the past century, Earle said.

Earth usually has about 15 to 20 earthquakes this size or larger each year, Earle said.

Initial calculations show that more than 30 million people would have felt moderate shaking from Tuesday's quake. The US Geological Survey predicts "significant casualty and damage are likely and the disaster is potentially widespread."