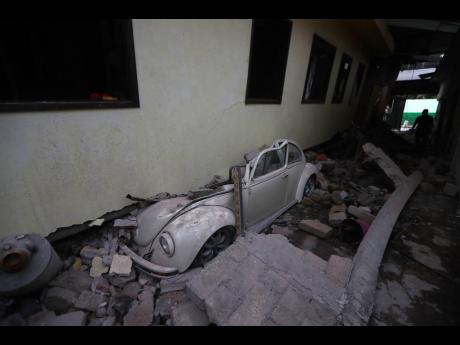 A car sits crushed from a building felled by a 7.1 earthquake, in Jojutla, Morelos state, Mexico, on Tuesday. – AP Photo

MEXICO CITY (AP):
Rescuers said Wednesday they have found a surviving child in the ruins of a school that collapsed in Mexico's magnitude 7.1 earthquake, one of many efforts across the city to save people trapped in or under schools, homes and businesses toppled by a quake that killed at least 225 people.

Helmeted workers worked at the debris, sometimes calling for silence, as they tried to reach the girl at the Enrique Rebsamen school in southern Mexico City.

Foro TV reported that rescuers spotted the child and shouted to her to move her hand if she could hear them, and she did. A search dog subsequently entered the wreckage and confirmed she was alive.

Tuesday's magnitude-7.1 quake struck on the 32nd anniversary of the 1985 earthquake that killed thousands. Just hours before it hit, people around Mexico had held earthquake drills to mark the date.

One of the most desperate rescue efforts was at the Rebsamen primary and secondary school, where a wing of the three-story building collapsed into a massive pancake of concrete slabs. Journalists saw rescuers pull at least two small bodies from the rubble, covered in sheets.

Volunteer rescue worker Dr Pedro Serrano managed to crawl into the crevices of the tottering pile of rubble that had been Escuela Enrique Rebsamen. He made it into a classroom, but found all of its occupants dead.

"We saw some chairs and wooden tables. The next thing we saw was a leg, and then we started to move rubble and we found a girl and two adults — a woman and a man," he said.

"We can hear small noises, but we don't know if they're coming from above or below, from the walls above (crumbling), or someone below calling for help."

A mix of neighbourhood volunteers, police and firefighters used trained dogs and their bare hands to search through the school's ruins. The crowd of anxious parents outside the gates shared reports that two families had received WhatsApp messages from girls trapped inside, but that could not be confirmed.

Rescuers brought in wooden beams to shore up the fallen concrete slabs so they wouldn't collapse further and crush whatever airspaces remained.

The federal Education Department reported late Tuesday that 25 bodies had been recovered from the school's wreckage, all but four of them children. It was not clear whether those deaths were included in the overall death toll of 225 reported by the federal civil defense agency. Pena Nieto had earlier reported 22 bodies found and said 30 children and eight adults were reported missing.