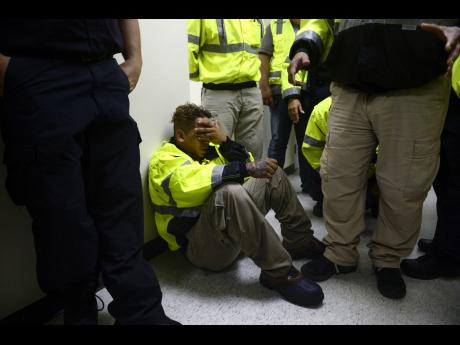 Rescue team member Jonathan Cruz cries on the floor as he waits to assist in the aftermath of Hurricane Maria in Humacao, Puerto Rico, on Wednesday. – AP Photo

SAN JUAN, Puerto Rico (AP):
One of the strongest hurricanes to ever hit Puerto Rico pummelled the island Wednesday, tearing off roofs and sending doors flying from hinges as officials warned Hurricane Maria would decimate the power company's crumbling infrastructure and force the government to rebuild dozens of communities.

Maria, which has killed at least nine in the Caribbean, made landfall early Wednesday in the southeast coastal town of Yabucoa as a Category 4 storm with winds of 155 mph (250 kph) winds, and it was expected to punish the island with life-threatening winds for 12 to 24 hours, forecasters said.

People calling local radio stations reported that doors were flying off hinges and a water tank flew away in the island's southern region. Meanwhile, widespread flooding was reported in the capital of San Juan, with water running down one apartment's interior staircase.

Gov. Ricardo Rossello warned of heavy rains and flooding but urged people to have faith: "We are stronger than any hurricane. Together, we will rebuild."

Metal roofs were already flying and windows were breaking as the storm approached before dawn, with people seeking shelter inside stairwells, bathrooms and walk-in closets. As Maria slowly crossed the island, it toppled cell phone towers, snapped trees and unleashed heavy flooding, dumping 20 inches (50 centimetres) of rain so far across Puerto Rico.

El Nuevo Dia newspaper reported that an emergency medical station in the north coastal town of Arecibo lost its roof, and communication was severed with several emergency management stations. One hospital and one police station reported broken windows. About 90 percent of customers were without power and one tree fell on an ambulance. Those who sought shelter at a coliseum in San Juan were moved to the building's second and third floors, radio station WKAQ 580 AM reported.

The storm was approaching Puerto Rico's northern coast Wednesday at 12 mph (19 kph), with top sustained winds of 140 mph (22 kph), according to the US National Hurricane Center in Miami. The eye was about 25 miles (40 kilometres) west of San Juan.

Previously a Category 5 storm with 175 mph (281 kph) winds, Maria hit Puerto Rico as the third strongest storm to make landfall in the United States based on a key measurement that meteorologists use: air pressure. The lower the central pressure a storm the stronger it is and Maria's pressure was 917 millibars, lower than Irma's US landfall of 929 millibars in the Florida Keys earlier this month.

Puerto Rico had long been spared from a direct hit by hurricanes that tend to veer north or south of the island. The last Category 4 hurricane landfall in Puerto Rico occurred in 1932, and the strongest storm to ever hit the island was San Felipe in 1928 with winds of 160 mph (250 kph).

As Maria approached, US President Donald Trump offered his support via Twitter: "Puerto Rico being hit hard by new monster Hurricane. Be careful, our hearts are with you- will be there to help!"
More than 4,400 people were in shelters by late Tuesday, along with 105 pets, Rossello said.

Maria killed two people in the French Caribbean island of Guadeloupe and two people aboard a boat were reported missing off La Desirade island, just east of Guadeloupe, officials said. About 40 per cent of the island — 80,000 homes — were without power and flooding was reported in several communities.

The storm also blew over the tiny eastern Caribbean island of Dominica late Monday, where Prime Minister Roosevelt Skerrit sent out a series of dramatic posts on his Facebook page, including that his own roof had blown away.

"The winds are merciless! We shall survive by the grace of God," Skerrit wrote before communications went down.

Hartley Henry, an adviser to Skerrit, said there have been seven confirmed deaths in the Caribbean country from Hurricane Maria. He  didn't say how the deaths occurred.

The storm knocked out communications for the entire island, leaving anyone outside Dominica struggling to determine the extent of damage, though it was clearly widespread. "The situation is really grave," Consul General Barbara Dailey said in New York.

She said she lost contact with the island about 4 a.m. At that point, officials had learned that 70 per cent of homes had lost their roofs, including her own.

Flooding was a big concern, given the island's steep mountains, cut through with rivers that rage even after a heavy rain. Dominica was still recovering from Tropical Storm Erika, which killed 30 people and destroyed more than 370 homes in August 2015.

Forecasters said the storm surge from Maria could raise water levels by 6 to 9 feet (1.8-2.7 meters) near the storm's center. The storm was predicted to bring 10 to 15 inches (25-38 centimetres) of rain across the islands, with more in isolated areas.

To the north, Hurricane Jose weakened to a tropical storm Tuesday night. Forecasters said dangerous surf and rip currents were likely to continue along the US East Coast but said the storm was unlikely to make landfall. Big waves from Jose swept five people off a coastal jetty in Rhode Island and they were hospitalised after being rescued.