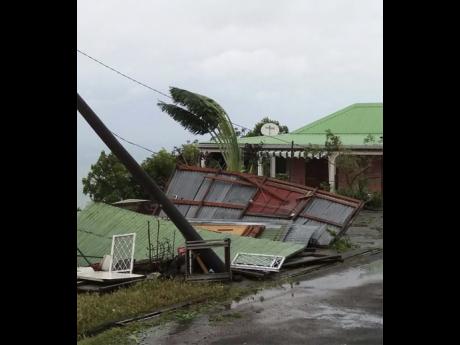 Dominica's leader sent out an emotional plea for help as Hurricane Maria smashed into the Caribbean island and caused "mind-boggling" devastation, but an ominous silence followed as the country lost all communications yesterday and the Category five hurricane barreled toward Puerto Rico, which looked likely to take a direct hit.

As rain began lashing the US territory yesterday afternoon, Puerto Rico's governor warned that Maria could hit "with a force and violence that we haven't seen for several generations".

"We're going to lose a lot of infrastructure in Puerto Rico," Governor Ricardo Rossello said, adding that a likely island-wide power outage and communication blackout could last for days. "We're going to have to rebuild."

Authorities warned that people in wooden or flimsy homes should find safe shelter before the storm's expected arrival today.

The warnings came after Dominica Prime Minister Roosevelt Skerrit sent out a series of dramatic posts on his Facebook page as the storm blew over that tiny country late Monday - but then stopped suddenly as phone and internet connections with the country were cut.

"The winds are merciless! We shall survive by the grace of God," Skerrit wrote before communications went down.

Officials on the neighboring French island of Guadeloupe reported at least one death: a person hit by a falling tree. They said two other people were reported missing after their boat sank off La Desirade island, just east of Guadeloupe.

About 40 per cent of the island - 80,000 homes - were without power and flooding was reported in several communities.

Next in the storm's path was St Croix in the US Virgin Islands, where the storm was expected to hit late yesterday. The island was largely spared the widespread damage caused by Hurricane Irma on the chain's St Thomas and St John islands just two weeks ago.

To the north, Hurricane Jose stirred up dangerous surf and rip currents along the US East Coast, though forecasters said the storm was unlikely to make landfall. Big waves caused by Jose swept five people off a coastal jetty in Rhode Island and they were hospitalized after being rescued.