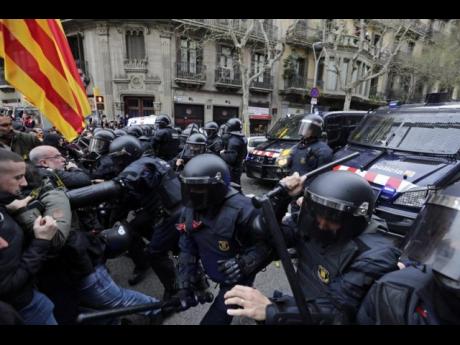 Prosecutors in Germany say that fugitive Catalan ex-president Carles Puigdemont will appear in court tomorrow in a northern German town “to confirm the identity of the detained.”

The Schleswig prosecutor’s office said in a statement that “the question of whether Mr. Puigdemont has to be taken into extradition custody, will then have to be determined by the higher regional court in Schleswig.”

The statement says that the court will check, based on extradition documents by Spain, if the handover of Puigdemont to Spanish authorities is “legally permissible”.

Puigdemont was detained this morning in Germany on an international warrant near the highway leading from Denmark to Germany.

In the meantime, crowds are clashing with police in downtown Barcelona as angry Catalans protest the detention of fugitive former leader Carles Puigdemont in Germany.

Police dressed in riot gear are striking demonstrators with batons as they try to push back a large crowd that wants to advance on the office of the Spanish government’s representative in Catalonia.

Catalan police have blocked the street and issued a call for people not to gather.

Thousands answered the call by a pro-independence grassroots group to protest in the city centre hours after Puigdemont was detained by German police.

Puigdemont fled from Spain in October following an illegal declaration of independence by the region.