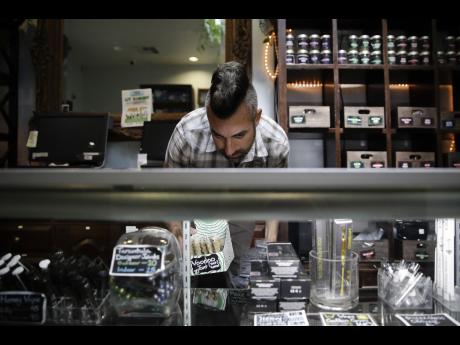 Weedmaps is a go-to website for people looking to find a marijuana shop. With a few clicks on a cellphone, customers can find virtually any type of cannabis product, along with the fastest route to the place selling it and ratings from other consumers to help them decide what to buy.

But legal and illegal operators advertise next to each other, and licensed operators in California say that's put them at a disadvantage in a cutthroat marketplace.

To them, Weedmaps is helping illegal sellers flourish without having any of the obligations licensed operators endure - collecting and paying taxes, insuring their businesses and employees, and abiding by safety rules for their products.

In other words, illegal shops can sell pot at cheaper prices, sometimes 30 per cent to 50 per cent less.

"It's an unfair playing field. They are pitting us against each other."

Weedmaps operates in over two dozen states, but the issue is coming to a head in California, which in January became the nation's largest legal marketplace. State regulators last month warned Weedmaps to stop advertising shops operating outside the law.

In a response, Weedmaps executives said they are eager to work with the state but asserted that the online directory doesn't fall under state authority and is shielded by provisions in federal law.

The company sees the core of the problem as a scarcity of legal outlets and hefty taxes that scare off consumers from licensed shops, not its online ads. In Los Angeles, where the pace of city licensing has been sluggish, only about 130 retail shops have authority to operate, while city officials acknowledge hundreds more are making illegal sales.

Weedmaps says its experience dropping unlicensed businesses from its listings in Washington, Oregon, Nevada and Massachusetts had no impact on the size of those unlicensed markets.