Pathologist: Stephon Clark was shot 8 times, 7 from behind 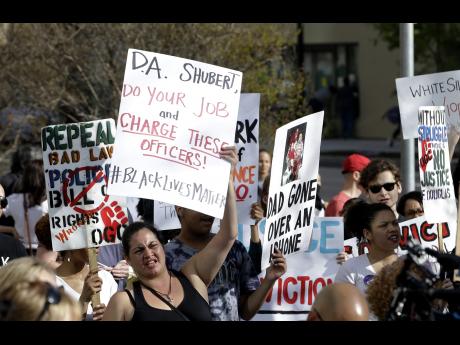 AP
Protesters march down a street after the funeral for police shooting victim Stephon Clark, in Sacramento, California on Thursday.

Sacramento police shot Stephon Clark seven times from behind, according to autopsy results released yesterday by a pathologist hired by Clark's family, findings that call into question the department's assertion that the 22-year-old black man was facing officers and walking toward them when he was killed.

Police officers, concerned Clark could be alive and armed, waited about five minutes to approach him after the shooting in his grandmother's backyard. Clark was not armed; police apparently mistook a cellphone in his hand for a gun.

"The proposition he was facing officers is inconsistent with prevailing forensic evidence," Omalu said at a news conference with family attorney Benjamin Crump.

He said it was not clear if Clark would have survived had he got immediate medical attention, and he noted that any of the six bullets that hit him in the back and one in the neck could have been the fatal shot. An eighth bullet went into Clark's thigh.

The shooting occurred March 18. Two officers responding to a call of someone breaking car windows shouted that Clark had a gun before firing.

Video released by police of the nighttime shooting shows officers at the corner of Clark's grandmother's house and him on the backyard patio. It's unclear if Clark knows the officers are there. He moves toward the officers' position as they peer around the corner and open fire. Clark staggers sideways and falls on his stomach as officers continue shooting. Twenty shots in all were fired, police said.