Trump, Kim converge on Singapore ahead of high-stakes summit 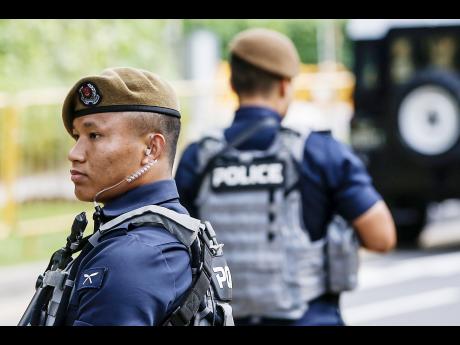 AP
Gurkha police officers guard the perimeter of the Shangri-La Hotel in Singapore yesterday ahead of the summit between US President Donald Trump and North Korean leader Kim Jong-Un.

President Donald Trump and North Korean leader Kim Jong-Un converged on this island city-state Sunday ahead of one of the most unusual and highly anticipated summits in recent world history, a sit-down meant to settle a stand-off over Pyongyang's nuclear arsenal.

Trump descended from Air Force One into the steamy Singapore night, greeting officials and declaring he felt "very good," before he was whisked away to his hotel, driving along a route lined with police and photo-snapping onlookers. Trump travelled to Singapore from Canada, where he met with other world leaders whose countries make up the Group of Seven.

Hours earlier, a jet carrying Kim landed. After shaking hands with the Singapore foreign minister, Kim sped through the streets in a limousine, two large North Korean flags fluttering on the hood, surrounded by other black vehicles with tinted windows and bound for the luxurious and closely guarded St Regis Hotel.

He and Trump are set to meet tomorrow morning in the first summit of its kind between a leader of North Korea and a sitting US president. The North has faced crippling diplomatic and economic sanctions as it has advanced development of its nuclear and ballistic missile programmes.

"The entire world is watching the historic summit between [North Korea] and the United States of America, and thanks to your sincere efforts ... we were able to complete the preparations for the historic summit," Kim told Lee through an interpreter.

Trump has said he hopes to make a legacy-defining deal for the North to give up its nuclear weapons, though he has recently sought to manage expectations, saying that it may take more than one meeting.

The North, many experts believe, stands on the brink of being able to target the entire US mainland with its nuclear-armed missiles, and while there's deep scepticism that Kim will quickly give up those hard-won nukes, there's also some hope that diplomacy can replace the animosity between the US and the North.