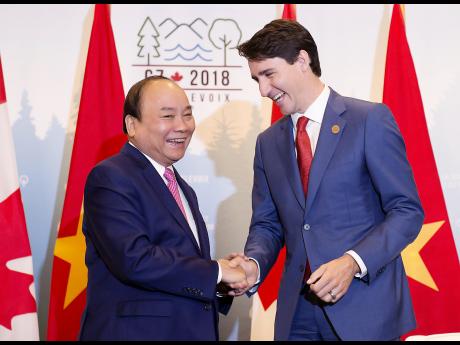 "There's a special place in hell for any foreign leader that engages in bad-faith diplomacy with President Donald J. Trump and then tries to stab him in the back on the way out the door," Trump trade adviser Peter Navarro said in an interview nationally broadcast in the United States.

The verbal volleys by Navarro and Trump's top economic adviser, Larry Kudlow, picked up where Trump left off Saturday evening with a series of tweets from Air Force One en route to Singapore for his nuclear summit tomorrow with North Korea's Kim Jong-Un. Kudlow suggested Trump saw Trudeau as trying to weaken his hand before that meeting, saying the president won't "let a Canadian prime minister push him around ... . Kim must not see American weakness."

Just as the Trudeau-hosted Group of Seven meeting of the world's leading industrialised nations had seemed to weather Trump's threats of a trade war, the president backed out of the group's joint statement that Trudeau said all the leaders had come together to sign.