Kremlin warns of possible flare-up of hostilities in Ukraine 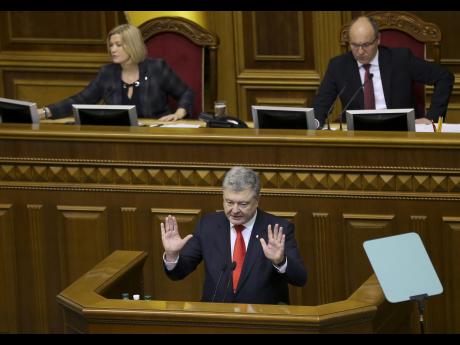 AP
Ukrainian President Petro Poroshenko gestures during a parliament session in Kiev, Ukraine, Monday, Nov. 26, 2018. Ukraine's president on Monday urged parliament to impose martial law in the country to fight "growing aggression from Russia," after a weekend naval confrontation off the disputed Crimean Peninsula in which Russia fired on and seized three Ukrainian vessels amid renewed tensions between the neighbors. (AP Photo/Efrem Lukatsky)

The Kremlin warned yesterday that a simmering war in eastern Ukraine could boil over after Russia seized three Ukrainian ships and Kiev responded by declaring martial law in parts of the country. Russia paraded the captured seamen on television, a move that Ukraine called criminal.

Russia and Ukraine have blamed each other for Sunday's confrontation in the Kerch Strait, which links the Black Sea and the Sea of Azov. The clash has raised the specter of renewing a full-blown conflict in eastern Ukraine and saw Russia strongly criticised at the United Nations by the United States and its allies.

The Ukrainian parliament on Monday adopted a motion by the president to impose martial law for 30 days. That is something Ukraine avoided doing even when Russia annexed its nearby Crimean peninsula in 2014 or sent in clandestine troops and weapons to insurgents in war-torn eastern Ukraine.

On Sunday near Crimea, Russian border guards rammed into and opened fire on three Ukrainian navy vessels travelling from the Black Sea toward a Ukrainian port. The Russians seized the ships and their crews.

Ukraine considers the 24 captured men to be prisoners of war and says some have been seriously injured, while Russia says they are individuals who have violated its border.

The Kremlin reacted strongly to Ukraine's declaration of martial law, with Dmitry Peskov, Russian President Vladimir Putin's spokesman, telling reporters Tuesday that it might trigger a flare-up in hostilities in eastern Ukraine.

Ukrainian troops have been fighting Russian-backed separatists in eastern Ukraine since 2014, a conflict that has left more than 10,000 dead, but fighting has eased since a truce in 2015.

The martial law formally went into effect on Monday in several parts of Ukraine, including areas bordering territory now held by the separatists.

The strait is spanned by a new bridge that Russia completed this year -- the only land link from the Russian mainland to the annexed peninsula of Crimea.