Congress, White House talking, but no quick end to shutdown 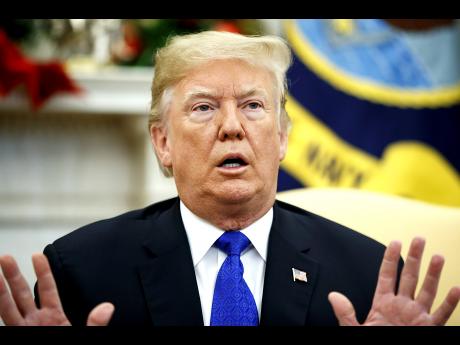 The United States Congress gavelled open for a rare Saturday session yesterday as America's elected leaders partially shut down the government, unable to find a compromise over money for President Donald Trump's promised wall along the US-Mexico border.

Trump is demanding US$5 billion, but congressional Democrats are refusing to accede in a stalemate that provides a chaotic coda for Republicans in the waning days of their two-year reign controlling the government.

The president jettisoned his Florida holiday getaway to Mar-a-Lago, tweeting, "I am in the White House, working hard." Trump hosted a lunch with conservative lawmakers, including House Freedom Caucus chiefs Mark Meadows of North Carolina and Jim Jordan of Ohio, and several senators, among them Lindsey Graham of South Carolina. Absent from the guest list were GOP leaders.

The president also acknow-ledged in a tweet that it could be "a long stay."

As Congress resumed work, talks continued between Democrats and the White House, but there was no clear path forward. No votes were scheduled, and House and Senate members were told they would receive 24 hours' notice before any vote.

Senate Majority Leader Mitch McConnell, said he hoped an agreement could be reached "sooner rather than later."

McConnell said any deal to reopen government would require Democratic support for passage and the president's signature. "That's what's needed."

The Democratic leader, New York Senator Chuck Schumer, said the shutdown could end immediately if Trump simply dropped his demand for money that was the centre piece of his presidential campaign. Trump had pledged that Mexico would pay for the wall; Mexico has refused.

"If you want to open the government, you must abandon the wall," Schumer said.

Democrats said they are open to other proposals that don't include the wall, which Schumer said is too costly and unpopular.