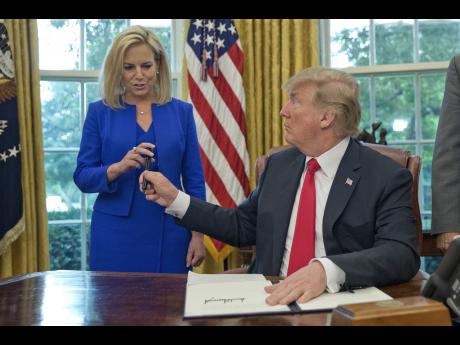 AP
In this Wednesday, June 20, 2018 file photo, President Donald Trump gives the pen he used to sign the executive order to end family separations to Homeland Security Secretary Kirstjen Nielsen during an event in the Oval Office of the White House in Washington. On Saturday, December 29, the president deflected any blame from his administration for the deaths of two Guatemalan children in December in US government custody as his Homeland Security adviser visited Border Patrol medical officials amid promises of more thorough health screenings for migrant children. (AP)

President Donald Trump sought to deflect blame for the deaths of two Guatemalan children in US custody by claiming they were "very sick" when they arrived, even though immigration authorities have said both children passed initial health checks.

The mother of the boy who died Christmas Eve told The Associated Press on Saturday that her son was healthy when he left with his father on their journey hoping to migrate to the US.

Trump, whose administration has faced widespread criticism over the deaths, pointed on Twitter at Democrats "and their pathetic immigration policies that allow people to make the long trek thinking they can enter our country illegally."

He also said that both children "were very sick before they were given over to Border Patrol".

The two tweets were his first comments on the December 8 death of seven-year-old Jakelin Caal and the death on Christmas Eve of eight-year-old Felipe Gomez Alonzo.

Felipe's mother, Catarina Alonzo, told the AP that her son reported he was doing well every time that he and his father called home during their trek. She spoke with AP journalists at the family's home in the remote Guatemalan village of Yalambojoch, her stepdaughter Catarina Gomez translating her indigenous language Chuj into Spanish.

"When he called me, he told me he was fine. He told me not to worry because he was fine," Catarina Alonzo said.

The mother said the last time she spoke with Felipe he was in Mexico at the US border and said he was eating chicken. Their village is in Nenton municipality in Huehuetenango province, about 250 miles (400 kilometers) west of Guatemala City.

US Customs and Border Protection has issued detailed statements about both children's deaths.

An initial screening of Jakelin "revealed no evidence of health issues," CBP said on December 14. It wasn't until several hours later that Jakelin's father, Nery Caal, told agents that she was "sick and vomiting," CBP said. Attorneys for the Caal family have also denied claims that Nery "hadn't given her water in days," as Trump wrote.

And CBP said Tuesday that agents logged 23 welfare checks of Felipe and his father in the first several days the two were was detained. Felipe's father, Agustin Gomez, told a Guatemalan official that the boy first showed signs of illness Monday morning, the day he died.

Despite Trump's claim that Democrats were responsible for "pathetic" immigration policies, at least one of the laws his administration has blamed - legislation that prevents the immediate deportation of unaccompanied children from Central American countries - was signed in 2008 by President George W. Bush, a Republican.

Democrats criticised the president's tweets. In a tweet addressing the president, Sen. Mazie Hirono wrote: "Obviously nothing is too low or cruel for you. A collective New Year's wish: For the sake of our country, you can stop now."

"You slander Jakelin's memory and re-traumatise her family by spreading lies about why she died," said US Rep Joaquin Castro of Texas.

The president's comments came Saturday afternoon, the same day Nielsen was in Yuma, Arizona, to meet with medical staff at the border. Nielsen said in a statement that "the system is clearly overwhelmed and we must work together to address this humanitarian crisis." She called on Congress to "act with urgency."