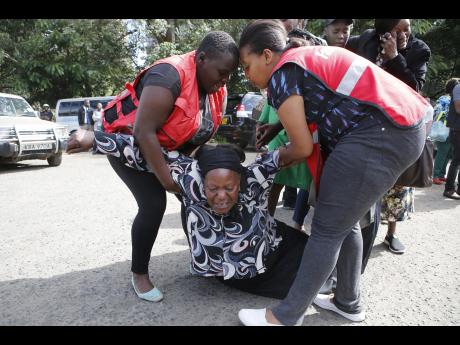 AP
A wounded member of Kenyan special forces with tourniquets around his legs, is carried from a US Embassy diplomatic vehicle into an ambulance by paramedics at the scene on Wednesday, January 16 in Nairobi, Kenya. 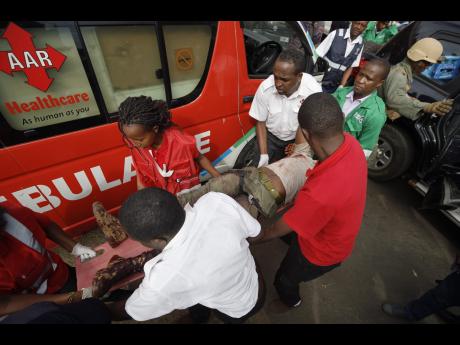 All the gunmen who staged a deadly attack on a luxury hotel and shopping complex in Nairobi were killed, Kenya's president said Wednesday, declaring an end to the brazen, overnight siege that underscored the ability of al-Shabab extremists to strike despite military setbacks.

Fourteen "innocent lives" were lost in the attack that began on Tuesday, President Uhuru Kenyatta said in a televised address to the nation.

"We will seek out every person that was involved in the funding, planning and execution of this heinous act," Kenyatta vowed in announcing that the all-night operation by security forces to retake the DusitD2 complex was over.

Security footage showed that at least four heavily armed men in military-style garb took part in the attack, an assault marked by explosions and heavy gunfire. Kenyatta did not say how many attackers were involved, but "all the terrorists have been eliminated".

Al-Shabab, which is based in Somalia and allied with al-Qaida, claimed responsibility. The Islamic extremist group also carried out the 2013 attack at Nairobi's nearby Westgate Mall that killed 67 people, and an assault on Kenya's Garissa University in 2015 that claimed 147 lives, mostly students.

While US airstrikes and African Union forces have degraded the group's ability to operate, it is still capable of carrying out spectacular attacks in retaliation for the Kenyan military's campaign against it in Somalia.

The attacks in Kenya's capital appear designed to inflict maximum damage to the country's image of stability and its tourism industry, an important source of revenue.

The government said late Tuesday that buildings were secure. However, gunfire continued into Wednesday morning, and dozens of trapped people were rescued overnight. Several loud booms were heard Wednesday as teams sought to clear the complex of booby traps and other explosives.

Kenyatta's announcement that the security operation was complete came about 20 hours after the first reports of the attack.

The Kenyan Red Cross said about 50 people were unaccounted for. But many of those were believed not to have been in the complex during the attack.

Ken Njoroge, CEO of a company in the DustiD2 complex that offers mobile banking services, said he was unable to locate several employees.

"It's very difficult for the families, because the passage of time only makes the problem bigger," he said.

Most of the victims were believed to be Kenyan, though an American and a Briton were among the dead. San Francisco-based I-DEV International confirmed that the American was Jason Spindler, the company's co-founder and managing director.