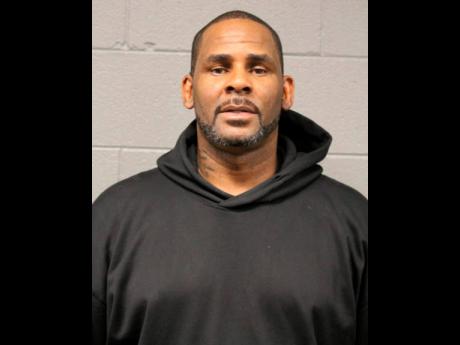 Uncredited
In this photo taken and released by the Chicago Police Department on, Friday, R&B singer R. Kelly is photographed during booking at a police station in Chicago, Illinois.

A judge yesterday gave R. Kelly a chance to go free while the R&B star awaits trial on charges that he sexually abused four people, including three minors, in a case that seemed likely to produce another #MeToo reckoning for a celebrity.

Cook County Judge John Fitzgerald Lyke Jr set bond at $1 million, meaning the 52-year-old Grammy winner must post $100,000 to be released or remain behind bars until he is tried on the allegations that date back as far as 1998 and span more than a decade.

Kelly turned himself in late Friday and spent a night in jail before being taken to the courthouse. He stood with his hands behind his back and said to the judge, “How are you?”

His attorney, Steve Greenberg, said Kelly is not a flight risk and told the judge, “Contrary to the song, Mr Kelly doesn’t like to fly”. One of Kelly’s best-known hits is I Believe I Can Fly.

The bond equals $250,000 for each of the four people Kelly is charged with abusing, the judge said.

Greenberg said Kelly “really doesn’t have any more money”, suggesting that others had mismanaged his wealth. Still, he said he expected that Kelly would be able to come up with enough money for bail.

Asked later how Kelly could find the cash, Greenberg said, “That’s none of your business.”

The judge called the allegations “disturbing”. The singer-songwriter looked down at the floor as the judge spoke.

Kelly’s DNA was found in semen on one of the accuser’s shirts, and semen found on one worn by another was submitted for DNA testing, Cook County State’s Attorney Kim Foxx said.

Kelly met one of the accusers when she was celebrating her 16th birthday party at a restaurant, and another when he signed an autograph during his 2008 trial on child-pornography charges, Foxx said.

Prosecutors said they have a video of another accuser that shows R. Kelly having sex with her when she was 14.

A fourth accuser told prosecutors that she thought she was going to braid R. Kelly’s hair, but that he instead tried to force her to give him oral sex. The woman, who was 24 at the time, was able to pull away, but Kelly ejaculated on her and spit in her face, Foxx said.

After the hearing, Greenberg told reporters that he thinks all four of the accusers are lying.

“He did not force anyone to have sex. He’s a rock star. He doesn’t have to have non-consensual sex,” Greenberg said.

Kelly has been trailed for decades by allegations that he violated underage girls and women and held some as virtual slaves. He was charged with 10 counts of aggravated sexual abuse.

Robert Kelly, who was acquitted of child pornography charges in 2008, has consistently denied any sexual misconduct. He broke into the R&B scene in 1993 with his first solo album, 12 Play, which produced such popular sex-themed songs as Bump N’ Grind and Your Body’s Callin’.