Brexit: British Parliament to decide between no deal and delay 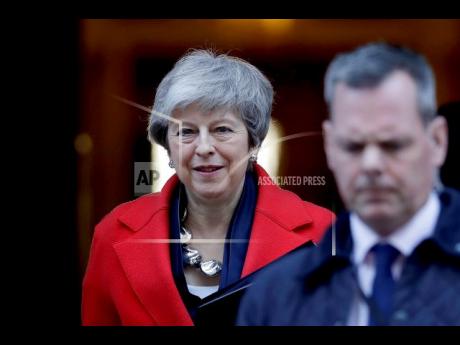 AP
Britain's Prime Minister Theresa May leaves 10 Downing Street to make a statement to the Houses of Parliament in London, today.

LONDON (AP) — Britain's bumpy journey out of the European Union took a major turn today, as Prime Minister Theresa May handed the steering wheel to Parliament, giving lawmakers the power to slam on the brakes and divert Britain away from a disruptive and chaotic Brexit.

Bowing to pressure from within her own government to avert a damaging "no-deal" Brexit, May told legislators she would give them three choices: approve the divorce agreement she has struck with the EU, vote to leave the bloc on March 29 without a deal, or ask the EU to delay Brexit by up to three months.

May said the promises were "commitments I am making as prime minister and I will stick by them".

It is the first time she has conceded that Britain may not leave the EU on March 29, the date fixed two years ago and enshrined in U.K. law as departure day.

With that date just over a month away, the government has not been able to win parliamentary approval for its agreement with the EU on withdrawal terms and future relations. Anxiety over the standoff is intensifying since a chaotic "no-deal" Brexit could cause disruptions for businesses and people in both Britain and the 27 remaining EU countries.

May promised lawmakers they would get to vote again on her deal by March 12. If it is rejected, lawmakers will vote the next day on whether to leave the bloc without an agreement. If the no-deal option is defeated, they will vote on whether to seek a delay to Brexit.

Because a majority of lawmakers opposes a "no-deal" Brexit, Parliament's choice is effectively between backing May's deal and postponing Britain's departure from the EU.

May said her goal remains to lead Britain out of the EU on schedule and with a deal.

"I don't want to see an extension," she said, adding that any delay to Brexit should be "as short as possible."

But her announcement angered pro-Brexit lawmakers.

"My suspicion is that any delay to Brexit is a plot to stop Brexit," said leading Conservative Brexiteer Jacob Rees-Mogg. "This would be the most grievous error that politicians could commit."

"A temporary extension does not rule out a no-deal Brexit; it merely moves the cliff-edge back a few weeks," said anti-Brexit Conservative Dominic Grieve.

May's concession to Parliament came after members of her government joined calls for her to rule out a "no-deal" departure. Three government ministers wrote in Tuesday's Daily Mail they planned to vote with opposition lawmakers to stop a no-deal withdrawal unless May agreed to delay Brexit and guarantee "we are not swept over the precipice on March 29."

Delaying Brexit would require approval from all 27 other EU countries. European Council President Donald Tusk said Monday the remaining members would "show maximum understanding and goodwill" to such a request.

But some EU leaders say Britain must have a good reason for seeking the delay.

Philippe Lamberts, an influential member of the European Parliament's Brexit steering group, said a British request for an extension must be accompanied by "a credible plan for holding a people's vote on the final deal that includes an option to remain" in the EU.

Businesses warn that without a deal, Britain risks a chaotic departure that could disrupt trade between the U.K. and the EU, its biggest trading partner. The uncertainty has already led many British firms to shift some operations abroad, stockpile goods or defer investment decisions.

Businesses and the markets breathed a sigh of relief at May's statement, which did not rule out "no deal" but at least pushed it a bit further away. The pound rose above $1.32, its highest level for a month.

"Today, we have seen real movement towards ruling out a chaotic and damaging no-deal on March 29," said Mike Cherry, national chairman of the Federation of Small Businesses.

But British politics remains deadlocked over Brexit, with both May's governing Conservatives and the main opposition Labour Party deeply split over whether to leave the bloc, and on what terms.

Pro-EU Conservative legislator Ken Clarke said delaying Brexit would not break the logjam, but only see the "present pantomime" continue, with "similar chaos about where we are going."

The House of Commons rejected May's deal with the EU last month — largely over concerns about a provision to guarantee an open border between the U.K.'s Northern Ireland and EU member Ireland — and sent May back to Brussels to get changes.

The EU is adamant that the legally binding withdrawal agreement can't be changed, though the bloc's negotiators are holding talks with U.K. Attorney General Geoffrey Cox about potential tweaks or additions around the margins.

A large group of lawmakers, from both government and opposition parties, says the only way out of the impasse is a new referendum on the terms of Britain's EU departure.

May insists she will never support a referendum that could overturn Britain's 2016 decision to leave the EU.

The Labour Party this week moved to support a new referendum as a way to break the deadlock. The left-of-centre party said it would back a second public vote if the House of Commons rejects its alternative Brexit plan, which calls for Britain to retain close economic ties with the EU.

Labour leader Jeremy Corbyn said that if May's deal was approved by Parliament, "we believe there must be a confirmatory public vote to see if people feel that's what they voted for" in the 2016 EU membership referendum.

But the idea of a new referendum is opposed by some Labour lawmakers in areas that voted to leave the bloc.

Labour lawmaker John Mann said Labour had previously promised to "accept the result of the referendum."

"A second referendum doesn't do that and the voters — in very, very large numbers — will not accept that," he said.