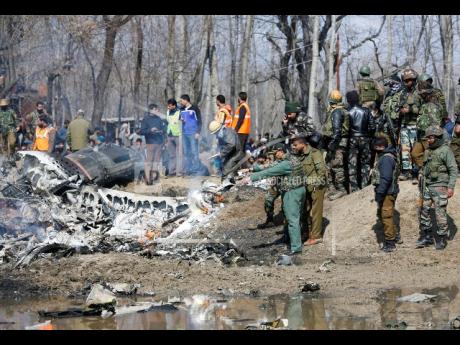 AP
An Indian Air Force officer along with others inspects the wreckage of an Indian aircraft after it crashed in Budgam area, outskirts of Srinagar, Indian controlled Kashmir, today.

The European Union is urging India and Pakistan to "exercise utmost restraint" as tensions mount between the two nuclear powers around the disputed region of Kashmir.

EU foreign policy chief Federica Mogherini warned Wednesday that "this has the potential to lead to serious and dangerous consequences for the two countries and the wider region."

In a statement, the EU's top diplomat called on "both countries to now exercise utmost restraint and avoid any further escalation of the situation."

Mogherini urged them to resume diplomatic contacts and take "urgent measures," without elaborating. She said the EU will remain in contact with both countries and closely monitor developments.

India says it expects an immediate and safe return of its air force pilot that Pakistan claims to have in its custody.

India's External Affairs Ministry in a statement says Pakistan would be well advised to ensure that no harm comes to Indian defence personnel in its custody.

India said Wednesday that one of its air force Mig-21 fighter aircraft has been "lost" in an engagement with Pakistani aircraft in the Indian portion of Kashmir and that its pilot was missing. Pakistan earlier said it shot down two Indian planes and captured two pilots.

The ministry said it summoned the acting High Commissioner of Pakistan and lodged a strong protest at the violation of the Indian air space by Pakistan Air Force and targeting of Indian military posts.

Pakistan's military now says that only one Indian pilot — not two — is in custody but still says they shot down two planes.

Military spokesman Maj. Gen. Asif Ghafoor tweeted that "only one pilot" is in Pakistan's custody. The tweet included a picture of a mustachioed man identified as the Indian pilot sipping tea.

An army official who could not be identified under briefing rules said the confusion came from soldiers on the ground. While two planes were shot down, he said one pilot landed inside Pakistani controlled Kashmir and the other on the Indian side of the disputed border.

Despite Geneva Convention rules prohibiting the public display of prisoners , the military circulated a video of the Indian pilot, who was recorded saying he was being well treated and praising the Pakistan military.

Germany is calling for dialogue between India and Pakistan, to prevent a further escalation of the situation between the two nuclear-armed states.

A spokeswoman for Germany's foreign ministry said on Wednesday that Berlin is watching developments in South Asia "with great concern."

Maria Adebahr told reporters that both sides have a responsibility to prevent an escalation.

She added that Germany is also calling on Pakistan specifically to act against extremist groups such as Jaish-e-Mohammad, which claimed responsibility for a bomb attack in Kashmir that killed more than 40 Indian troops earlier this month.

Turkey has expressed concerns over increasing tensions between Pakistan and India and called on both to exercise "common sense and restraint."

Foreign Minister Mevlut Cavusoglu told reporters Wednesday that the two countries should avoid any steps that would further escalate the tensions.

Cavusoglu says it is important that the dispute over Kashmir be resolved, adding that Turkey is ready to contribute to a solution.

The minister says "the Kashmir problem is a conflict whose solution has been frozen for years but which constantly leads to tensions between the two countries."

Cavusoglu says that he has discussed the issue in a telephone conversation with his Pakistani counterpart.

Khan says that war benefits neither nation and that he hopes "better sense can prevail."

In a televised address to the nation, Khan says Pakistan is "ready to cooperate" and added: "Let's sit together to talk to find a solution."

Khan again promised to cooperate with India to find the perpetrators behind a February suicide attack in Indian-controlled Kashmir that killed more than 40 Indian troops.

Indian police say officials have recovered four bodies from the wreckage of an Indian Air Force chopper that crashed in Indian-controlled sector of Kashmir.

Senior police officer Munir Ahmed Khan said the chopper crashed close to an airport on Wednesday in Budgam area, in the outskirts of the region's main city of Srinagar. The Srinagar airport, which has been shut along with two other airports for civilian flights in the region, is also an air force station.

Police said they were still going through the wreckage and did not immediately identify the victims. Local residents earlier said they saw three bodies at the site.

Eyewitnesses said soldiers fired warning shots in air to keep residents away from the crash site.

Meanwhile, as the tensions and confrontation escalated between India and Pakistan, authorities asked workers to paint rooftops of hospitals and clinics in red and white with medical emblem of cross in Srinagar city.

India says one of its air force Mig-21 fighter aircraft has been "lost" in an engagement with intruding Pakistani aircraft in the Indian portion of Kashmir and that its pilot is missing.

India's External Affairs Ministry spokesman Raveesh Kumar says that one Pakistan air force aircraft also was shot down and India's ground forces saw it falling from the sky on the Pakistan side on Wednesday.

Kumar's statement came hours after Pakistan claimed that its air force shot down two Indian warplanes after they crossed the boundary between the two nuclear-armed rivals in the disputed territory of Kashmir and captured two Indian pilots, one of whom was injured.

Kumar said India was still "ascertaining" whether its pilot was in Pakistan's custody.

China is renewing calls for Pakistan and India to take steps to avoid a further deterioration of ties following the latest flare-up over Kashmir.

Foreign Ministry spokesman Lu Kang told reporters at a daily briefing on Wednesday that "both Pakistan and India are important countries in the subcontinent of South Asia."

Lu also said: "We hope they will avoid deterioration of the situation."

China is longstanding close ally and arms supplier to Pakistan, but has also sought better ties with its southern neighbour and Asian rival India.

India's former ambassador to the United States says that a new red line with Pakistan has been drawn.

The remarks came hours after Pakistan said its air force shot down two Indian warplanes after they crossed the boundary in the disputed region of Kashmir and captured two Indian pilots.

Retired diplomat Lalit Mansingh said on Wednesday that India's policy of strategic restraint "is no longer."

The strikes were the deepest inside Pakistani territory since the neighbouring countries last went to war over Kashmir in 1971.

Pakistan's Civil Aviation Authority says it has shut its airspace to all commercial flights as tensions with neighbouring India escalate further over the disputed region of Kashmir.

The agency says in a statement that the airspace was closed on Wednesday, without elaborating or indicating when flights might resume.

This came shortly after Pakistan said its air force shot down two Indian warplanes after they crossed the boundary between the two nuclear-armed rivals in the disputed territory of Kashmir, and captured two Indian pilots.

The latest wave of tensions erupted after a pre-dawn strike by Indian aircraft Tuesday on Pakistani territory.

Pakistan's military says it has two Indian pilots now in custody, captured after the Pakistani air force shot down their aircraft on its side of the disputed region of Kashmir.

The military's spokesman, Maj. Gen. Asif Ghafoor, says one of the pilots is injured and is being treated in a military hospital. He did not elaborate on the pilot's injuries. Ghafoor says the other pilot is in custody.

The military says the Indian Air Force plane was downed on the Pakistani side of the Line of Control in Kashmir — a boundary separating the disputed Himalayan region between the nuclear armed neighbours.

Ghafoor says the Indian pilots "are being treated well." He made no mention of whether they would be returned to India.

Tensions remain high on the Asian Subcontinent where tens of thousands of Indian and Pakistani soldiers face off along the Kashmir boundary.

Indian news reports say that airports in the Indian portion of Kashmir have been closed for civilian traffic shortly after an Indian air force jet crashed in the area.

The Press Trust of India news agency says these airports are located at Srinagar, Jammu and Leh. Indian authorities declined to comment.

Pakistan said its air force shot down two Indian warplanes after they crossed the boundary between the two nuclear-armed rivals in the disputed territory of Kashmir, and that one Indian pilot was captured on Wednesday.

New Delhi has not commented on Pakistan's claim.

The closure of airports in Indian-controlled Kashmir came amid escalation of tensions between nuclear rivals India and Pakistan following a pre-dawn airstrike by India on Tuesday that New Delhi said targeted a terrorist training camp in northwest Pakistan.

Pakistan says Indian warplanes dropped bombs near the town of Balakot but that there were no casualties.

Pakistan's foreign ministry says the country's Air Force is carrying out airstrikes from within Pakistani airspace across the disputed Kashmir boundary but that this was not in "retaliation to continued Indian belligerence".

The ministry said the strikes on Wednesday are aimed at "avoiding human loss and collateral damage."

The statement came shortly after the Pakistani military shot down two Indian airplanes after they crossed the Kashmir border and captured one of the pilots.

It says the Pakistanis have "no intention of escalation, but are fully prepared to do so if forced into that paradigm. That is why we undertook the action with clear warning and in broad daylight."

Meanwhile, civil administrator Baseer Khan confirmed that the airport in Srinagar, the main city in Indian-controlled Kashmir, was closed and said it was a "temporary and precautionary measure."

Pakistan's army spokesman says the country's air force shot down two Indian warplanes after they crossed the boundary between the two nuclear-armed rivals in the disputed territory of Kashmir, and that one Indian pilot was captured.

Maj. Gen. Asif Ghafoor says Pakistani troops on ground captured the Indian pilot. He says one of the planes crashed in Pakistan's part of Kashmir and the other went down in Indian-controlled Kashmir.

He says that "one Indian pilot was arrested by troops on ground while two are in the area" on Wednesday.

Another police officer, S.P. Pani, said firefighters were at the site in Budgam area where the warplane crashed. Eyewitnesses said soldiers fired in air to keep residents away from the crash site.

India says it does not wish to see a further escalation of the situation with Pakistan and will continue to act with responsibility and restraint.

This shortly after Pakistani police said mortar shells fired by Indian troops from across the frontier in the Himalayan region of Kashmir killed six civilians on Wednesday.

India's External Affairs Minister Sushma Swaraj says the limited objective of Tuesday's pre-emptive strike inside Pakistan was to act decisively against the terrorist Jaish-e-Mohammad group to prevent another attack in India.

Swaraj spoke at the 16th Meeting of the foreign ministers of Russia, India and China in Wuzhen, China.

Pakistan-based Jaish-e-Mohammad group claimed responsibility for a suicide attack on a convoy of India's paramilitary forces in the Indian portion of Kashmir on Feb. 14 that killed 40 troops.

Pakistan said there were no casualties in India's airstrike near the town of Balakot on Tuesday.

Pakistani police say mortar shells fired by Indian troops from across the frontier in the Himalayan region of Kashmir struck homes, killing six civilians and wounding several others amid increasing tensions between the two South Asian nuclear rivals.

Local police official Mohammad Altaf says six people, including children, were killed Wednesday in Kotli village in Pakistan's part of Kashmir, which is split between Pakistan and India and claimed by both in its entirety.

Pakistan says Indian warplanes dropped bombs near the town of Balakot but there were no casualties.