Workers dig by hand to free dozens in Indonesia mine rubble 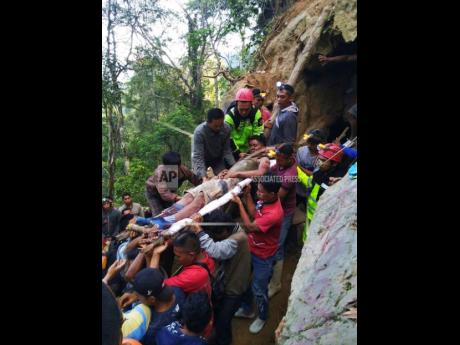 AP
In this undated photo released by Indonesian Search And Rescue Agency (BASARNAS) rescuers evacuate a survivor from inside of a collapsed gold mine in Bolaang Mongondow, North Sulawesi, Indonesia.

The national disaster agency said four people are confirmed dead and an estimated 37 are still buried beneath soil and rocks in an area that is difficult to access because of its remoteness and steep terrain.

"The land contour is worrying with an 80 degree slope, so it's pretty steep, and we don't want any unwanted things to happen," said local police chief Gani Fernando Siahaan. "We will continue the rescue process until night as long as weather permits."

Emergency personnel used their bare hands and farm tools to search for the victims. Video showed rescuers struggling to bring out a body bag in nearly vertical terrain.

Makeshift wooden structures in the mine in Bolaang Mongondow district collapsed on Tuesday evening due to shifting soil and the large number of mining holes, burying people in the mine pit.

The disaster agency said at least 140 people from different agencies are involved in the rescue effort. It said there is an urgent need for body bags.

Informal mining operations are commonplace in Indonesia, providing a tenuous livelihood to thousands who labour in conditions with a high risk of serious injury or death.

Small artisanal and often unauthorised mining is rising in many parts of Asia and Africa. A study by the Intergovernmental Forum on Mining, Minerals, Metals and Sustainable Development found the number of people engaged in such mining had risen to over 40 million, up from 30 million in 2014 and 6 million in 1993.

Landslides, flooding and collapses of tunnels are just some of the hazards. Much of the processing of gold ore involves use of highly toxic mercury and cyanide by workers using little or no protection.