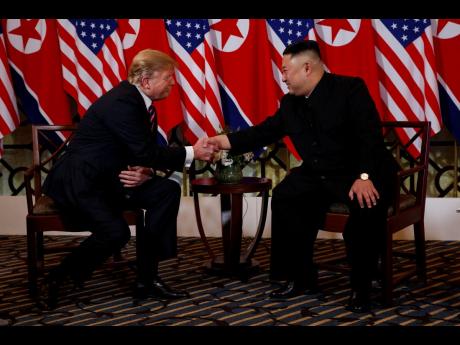 Only four other ears on the planet heard what President Donald Trump and North Korean leader Kim Jong Un said to each other Wednesday during a one-on-one chat that began their second nuclear summit.

The two leaders’ interpreters were the only others privy to their conversation, raising concerns about why Trump would risk meeting Kim, who has threatened the US with nuclear strikes and has a dismal human rights record, without staff to take notes.

Absent a detailed historical record and corroborating witnesses, the leaders could potentially leave a meeting and misrepresent what transpired, prompting a kind of he said-he said showdown of words.

More one-on-one talks between Trump and Kim are scheduled for Thursday, when the two leaders dig into the meat of their nuclear talks.

Trump has had private confabs with world leaders before that have raised red flags.

Early in his presidency, he met Russian President Vladimir Putin in Germany with only a Kremlin interpreter present. Last year, after Trump spent more than two hours talking with Putin in Helsinki, Finland, Democrats tried to subpoena Trump’s translator to testify in Congress about what was said.

Republicans blocked it. The White House has never provided information on what Putin and Trump talked about. Even Trump’s director of national intelligence, Dan Coats, said he didn’t know.

Some experts on past US-North Korean diplomatic efforts worry that the private sit-downs give Kim an opportunity to win concessions from Trump that working-level officials would have advised him not to offer.

Before the summit, Senator Ed Markey, Democrat from Massachusetts, said he thought Kim requested the private meeting with hopes that he could “elicit concessions from President Trump that might not otherwise be possible if it was just our diplomats talking one-on-one”.

Others think there’s nothing wrong with the president’s penchant for one-on-one meetings with world leaders.