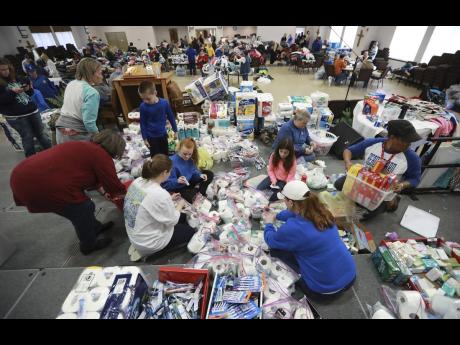 AP
Dozens of volunteers help sort donated supplies pouring in from the community and local businesses at the Providence Baptist Church for those affected in nearby Beauregard, Alabama, a day after a tornado on Monday. 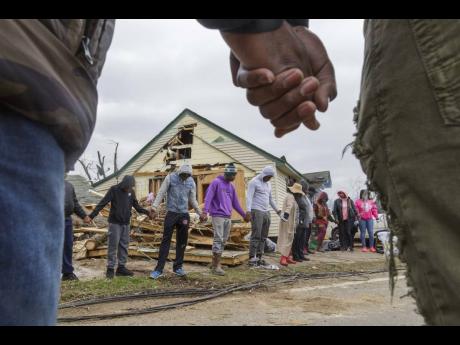 AP
Residents of Talbotton, Ga,. pray together outside a home destroyed by a tornado the day after storms battered Alabama and Georgia, Monday. (Grant Blankenship/The Macon Telegraph via AP, File)
1
2

The youngest victim was six, the oldest 89. One family lost seven members.

The 23 people killed in the nation’s deadliest tornado in nearly six years came into focus yesterday when the coroner finished identifying them and released their names.

The search for victims in and around the devastated rural community of Beauregard continued, with crews using heavy equipment to lift large chunks of wreckage. But Sheriff Jay Jones said the list of missing people had shrunk from dozens to just seven or eight.

“We are still conducting some searches, sifting through piles of debris where there may be people or animals,” said Opelika Fire Chief Byron Prather. “We haven’t given up hope.”

The dead also included 53-year-old David Wayne Dean, whose body was found in a neighbour’s yard after the twister demolished his mobile home Sunday afternoon. He was known as 'Roaddog' for his love of Harley-Davidson motorcycles.

“Our son found him,” his widow, Carol Dean, said between sobs. “He was done and gone before we got to him. My life is gone. He was the reason I lived, the reason that I got up.”

After the tornado passed, she rushed home from work at Walmart and pushed past sheriff’s deputies to be with her husband one last time. Picking through the ruins of their home, she found her wedding dress and a Father’s Day note to her husband that read, “Daddy, I love you to pieces.”

The tornado was an EF4 packing winds estimated at 170mph (274kph) and chewed a path of destruction up to nine-tenths of a mile (1.4 kilometres) wide in Alabama for nearly 27 miles (43 kilometres), the National Weather Service said. Ninety people were injured, it said.