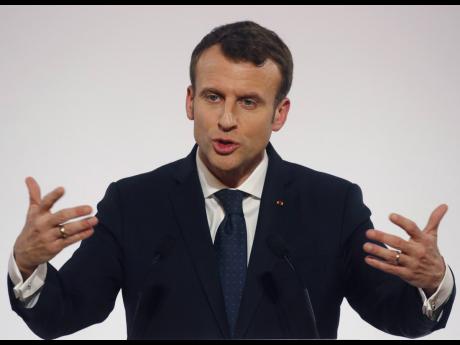 French President Emmanuel Macron drew both support and scepticism yesterday with a clarion call to voters in 28 nations to choose a stronger European Union (EU) and reject populists, amid concerns that Eurosceptics could reach unprecedented success in upcoming European parliament elections.

In a column published for Tuesday’s editions throughout the bloc, Macron advised voters in the May 23-26 EU parliament elections to reject nationalist parties that “offer nothing", laying down the battle lines for the vote.

Instead, he called on people to support parties that want to strengthen Europe.

Macron himself defeated an anti-EU candidate to become modern France’s youngest leader, but his popularity at home has dipped since taking office to the strains of the bloc’s anthem, 'Ode to Joy'.

The column is his furthest-reaching attempt to shore up the EU, where nationalist and populist candidates have seen gains, including in neighbouring Italy and most recently in the Estonia general election on Sunday.

“Never has Europe been in so much danger,” he wrote. He called Brexit a symbol of the crisis plaguing Europe – a “trap” of lies and irresponsibility backed by fake news.

“Freedom, protection and progress: we need to build European renewal on these pillars. We can’t let nationalists with no solutions exploit people’s anger. We can’t sleepwalk to a diminished Europe. We can’t remain in the routine of business as usual and wishful thinking,” he wrote.

He proposed the creation of an agency to protect member states’ elections from cyberattacks and other manipulations. He also seeks to ban the financing of EU political parties by foreign powers.

Macron also called for Europe to lead the fight against climate change by setting a target of zero carbon-dioxide emissions by 2050 and cutting pesticide use in half by 2025.