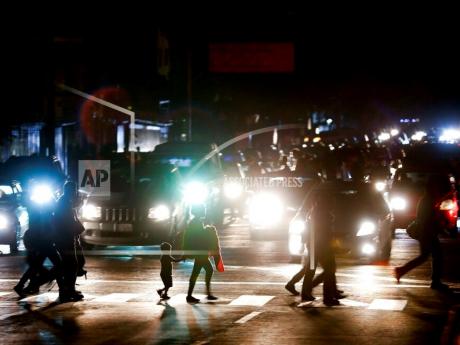 Residents cross a street in the dark after a power outage in Caracas, Venezuela last night - AP photo

CARACAS, Venezuela (AP) —
Much of Venezuela was still without electricity this morning amid the country's worst-ever power outage, raising tensions in a country already on edge from ongoing political turmoil.

By many accounts, the blackout hit 22 of 23 states, and it struck the capital at the peak of the evening rush hour Thursday, sending thousands of people on long night time treks home through some of the world's most violent streets.

Until now, Caracas has been spared the worst of a collapse in the nation's grid, but the outage was still wreaking havoc more than 16 hours after it began.

Venezuela's socialist government blasted the power failure as an "electrical war" directed by the United States.

Communications Minister Jorge Rodriguez said right-wing extremists intent on causing pandemonium in Venezuela and taking orders from Florida Republican Senator Marco Rubio were behind the blackout, although he offered no proof.

"A little bit of patience," Rodriguez urged on state television early Thursday evening, saying service would be restored in a few hours.

But as the blackout wore on, patience was running thin.

With normally hyper-active social media eerily silent, residents threw open their windows and banged pots and pans in the darkness, shouting expletives at Maduro in a sign of mounting frustration.

Even state TV — the government's main vehicle for handing down a political line to its followers — went silent.

Those lucky enough to have a battery-powered radio lying around tuned into the few networks still operating, although information remained scarce.

At the darkened maternity ward at the Avila Clinic in wealthy eastern Caracas, several mothers Thursday night cried as nurses holding candles monitored the vital signs of premature babies in incubators after backup generators shut off.

Carlos Ramos, a Caracas resident, stood outside the hospital early Friday along with medical staff and patients in the fading hope he'd be able to see a doctor. He rejected the government's assertion of sabotage as false.

"They always say that," Ramos said.

The outage comes as Venezuela is in the throes of a political struggle between Maduro and opposition leader Juan Guaido, the head of congress who declared himself the nation's rightful president in January and is recognised by the United States and about 50 nations.

Guaido took to Twitter to blast Maduro for the outage, looking to capitalise on what some decried as a sign of Venezuela's new found status as a "failed state" even though it sits atop the world's largest oil reserves.