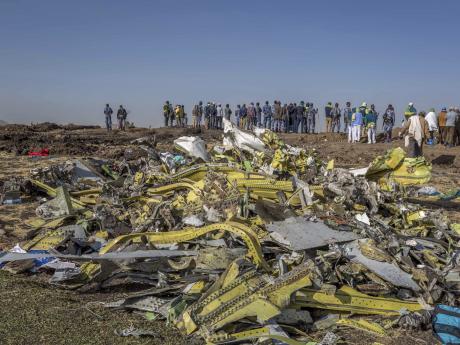 HEJERE, Ethiopia (AP) — Airlines in Ethiopia, China, Indonesia and elsewhere grounded the Boeing 737 Max 8 jetliner Monday after the second devastating crash of one of the planes in five months.

But Boeing said it had no reason to pull the popular aircraft from the skies.

As the East African country mourned the 157 victims of the Ethiopian Airlines plane that went down in clear weather shortly after takeoff Sunday, investigators found the jetliner’s two flight recorders at the crash site outside the capital of Addis Ababa.

An airline official, however, said one of the recorders was partially damaged and “we will see what we can retrieve from it.”

The official spoke on condition of anonymity for lack of authorisation to speak to the media.

A witness to the crash told The Associated Press that smoke was coming from the rear of the plane before it hit the ground.

“Before falling down, the plane rotated two times in the air, and it had some smoke coming from the back then, it hit the ground and exploded,” Tamrat Abera said.

“When the villagers and I arrived at the site, there was nothing except some burning and flesh.”

Ethiopian authorities are leading the investigation into the crash, assisted by the U.S., Kenya and others.

The crash was similar to that of a Lion Air jet of the same model in Indonesian seas last year, killing 189 people.

The crash was likely to renew questions about the 737 Max 8, the newest version of Boeing’s single-aisle airliner, which was first introduced in 1967 and has become the world’s most common passenger jet.